‘I love it when things go wrong’: Ryan Tubridy gears up for the toy show

This year's annual Late Late Toy Show on RTE will have an 'under the sea' theme based on the story of 'The Little Mermaid'. It will be Ryan Tubridy's ninth year presenting the show. Video: Bryan O'Brien 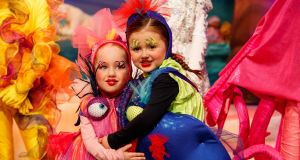 This year’s Late Late Toy Show will have a nautical theme. It has been a wish of host Ryan Tubridy for years that Hans Christian Andersen’s timeless fairytale, The Little Mermaid, would be adapted for RTÉ’s big showcase and so it has come to pass .

Let’s hope it goes swimmingly for the 240 children, 28 toy-testers and the host, who admits he will still be nervous despite this being his ninth toy show.

“This is my toy show,” he says. Others have done it before him but it is hard to imagine anyone else in the role. By his own admission, he will be the “biggest child” on stage on Friday night. Mishaps and toys that do not work are to be cherished, he says. “I love it when things go wrong.”

No presenter has embraced the spirit of the toy show so completely. “The interest in it is insane. I feel like I’m about to resign from the cabinet.”

The Late Late Toy Show is the biggest event in the RTÉ calendar. It is TV gold and not just because of giant gold-coloured balloons spelling out the words “Toy Show” at the entrance to the main studio. In a time of infinite choice and fractured attention-spans, it is one of the few TV events in the country – outside the biggest sporting occasions – where the entire country coalesces around their TV sets.

Last year’s iteration was watched live in 102 countries, an illustration of the spreading Irish diaspora or proof that this most Irish of institutions had universal appeal.

Children have been submitting their rehearsal videos to take part in the show since May of last year. There are two and a half wheelie bins full of USB sticks from children wishing to participate. Half a dozen researchers viewed the contents of them all.

The best ones were called to rehearsals in Mullingar, Dublin and Cork. The best of the best were selected for the show.

“When I walked over to the car from school and my Mum told me [they were participating in the Late Late Toy Show], we were so excited we started jumping around the place,” says Aoife Feehily (10) a member of the Lisa Cooper Dance Academy from Sligo. She is “nervous but excited”.

It promises to be a night to remember too for the choir of the Holy Family School for the Deaf in Cabra.

The children aged four to 12 are members of a choir that cannot sing. Instead, they will sign to their chosen music.

Homeless children will also be participating, though they will not be identified as such. Deviating from what would usually be the most apolitical of occasions, Tubridy described the figure of 3,000 homeless children as “preposterous and unacceptable”.

“We’re really aware of it,” he added. “It is more to the point that yes there are toys, yes it is magic, but it should not be the case that children are watching the toy show on a bed in a hotel room and in the morning have to walk past a bunch of guys who are still drinking from the night before.”

This year children from LauraLynn Children’s Hospice, the Jack and Jill Children’s Foundation, Temple Street Children’s University Hospital, Our Lady’s Children Hospital, Crumlin, and Barnados got a sneak preview of the set and the toys.

Their visit will be captured onscreen and will be aired during the show. All toys featured on the show will be donated to charity following the broadcast.

TV Guide: 25 of the best shows to watch this week
3

Pierce Brosnan: ‘I was an only child from a fractured family’
6