Peaky Blinders returns, plus Who Wants to Be a Millionaire? and Jane Austen’s Sanditon 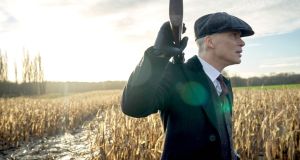 Who Wants to Be a Millionaire?
Saturday-Sunday, Virgin Media One, 9.10pm (Sat), 9pm (Sun)/UTV, 9.10pm (Sat), 8pm (Sun)
One of the best quiz shows on the box is back for a new run, though the top prize could do with a little tweaking. Given the fact the series is now 21 years old, you’d think the cash would be closer to £1.7 million in line with inflation. But it’s still a hefty sum for lucky players to take home, if they have the skill and nerve to go the distance. Since Chris Tarrant left the show a few years ago, many thought that was that, but Jeremy Clarkson has done a terrific job in his place, and this week he returns as the acerbic host. As ever, contestants have lifelines if they get stuck, including Ask the Audience, Phone a Friend and 50-50.

John Thomson has long been one of the funniest blokes on the box, whether in The Fast Show, Cold Feet or working with Steve Coogan. He’s also rather good in this cheap ’n’ cheerful comedy clips show. This week, hosts Jack Bullman (Thomson) and Nicky Brimble (Jessica Knappett) assess coverage of The World’s Angriest Goose, Premier League Mirror-Smashing and Interpretive Shop Destruction.

Prince Albert: A Victorian Hero Revealed
Saturday, Channel 4, 8pm
Queen Victoria’s husband was largely remembered as a VIP whose untimely death at the age of 42 inspired much mourning. Initially viewed with suspicion and hostility by the British public and dismissed by parliament, Albert faced an uphill struggle to carve out a role and be taken seriously. New research now suggests that he played a major part in shaping Victorian Britain. With access to his private papers in the Royal Archives and many photos, Prof Saul David examines Albert’s influence on British culture, governmental policy and international relations.

A look at how Hitler calculated that to fight on long enough to fulfil his aim of eradicating Europe’s Jews he needed to capture the Caucasus, and to do that he had to take Stalingrad. There is also a look at how the US rebuilt its navy and took itself from the 18th-ranked army in the world to be second only to the Soviet Union, a tale of ingenuity and enterprise that turned the vast resources of America into the numbers that could win a war.

Peaky Blinders
Sunday, BBC1, 9pm
If ever a series could be called a slow-burner, Peaky Blinders is it. Its popularity seems to grow as word spreads about this excellent drama set among the gangs of Birmingham in the early years of the century, and excitement for the arrival of series five is reaching feverish levels. Cillian Murphy returns in his now-iconic role of Tommy Shelby, the cruel, charismatic leader of the titular gang. But all is not well in the Peaky Blinders’ world. Having survived the turmoil of the Great War, the gang now has to contend with the global financial crash of 1929, which is threatening to eat into their ill-gotten gains. And Tommy, now a member of parliament, has a new political foe: the fascist Oswald Mosely, who approaches the gang with a bold new vision for Britain’s future.

We can reel off the titles of Jane Austen’s classic novels – Pride and Prejudice, Sense and Sensibility, Northanger Abbey, Mansfield Park, Emma – but we must admit we stalled at Sanditon, her final, unfinished novel. Austen only completed 11 chapters before she died in 1817, and since then numerous writers have had a go at finishing it while keeping to Austen’s style and vision. The story revolves around the free-spitited Charlotte Heywood, who moves from her rural hamlet to the titular new seaside resort. There, we presume, she encounters the kind of carry-on and intrigue you might see in racy seaside postcards. You can be sure there will be twists and turns, alliances and dalliances, bother and betrayals, all wrapped up in clipped, well-enunciated conversation and impeccable etiquette. And we literally can’t guess how it all will end.

Peter Rice: An Engineer Imagines
Sunday, BBC4, 9pm
While everyone hails the great starchitects who designed some of the world’s most iconic buildings, we don’t often acknowledge the structural engineers who make it possible to turn vision into reality. Irishman Peter Rice (1935-1992) was one of the greatest structural engineers of the late 20th century, working on the Centre Pompidou in Paris, the Sydney Opera House and the Louvre Pyramid in Paris. This documentary looks at Rice’s life and legacy through mindblowing time-lapse photography. According to Irish Times film critic Donald Clarke in his four-star review, the documentary is perhaps “a little short of mathematical detail, but its treatment of its subject’s life and philosophy cannot be faulted. There can be no greater compliment than to say it sends one out eager to learn more. Nice photography. Warm interviews.”

Peter Taylor: My Journey Through the Troubles
Sunday, BBC2, 10pm

In this documentary marking the 50th anniversary of the deployment of British troops into Northern Ireland in August 1969, journalist Peter Taylor reflects on his experiences of covering the Troubles for almost a half century. Taylor has written a number of books on political violence, exploring the Troubles from British, loyalist and republican points of view. This film is a highly personal account of the key events of the Troubles and the enduring legacies of the conflict.

A Black and White Killing: The Case That Shook America
Sunday, BBC2, 9pm
Part one of two. Mobeen Azhar investigates the murder of Larnell Bruce in August 2016 by a member of a white supremacist gang in Portland, Oregon, and assesses the degree to which race played a role in the choice of victim. The investigation delves into the history of the seemingly liberal city, and uncovers a dark underbelly of racial tensions in the state of Oregon. The programme also examines the events of the trial, which were marked by clashes between anti-fascist groups and white supremacists on the streets. Featuring interviews with members of the militant groups and expert witnesses called on to testify.