Theranos and me: A ‘Tallaght cowboy’ in a failed Silicon Valley start-up 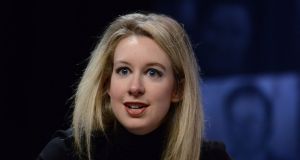 Elizabeth Holmes, founder and chief executive of Theranos, was once estimated by Forbes to have a personal net worth of $4.5 billion. Photograph: Lisa Lake/ Getty Images

The recent HBO documentary The Inventor: Out for Blood in Silicon Valley tells the story of failed blood-testing start-up Theranos and its chief executive, Elizabeth Holmes.

Founded in 2003, Theranos promised to revolutionise blood testing by devising technology that could conduct wide-ranging blood tests and test for diseases using a mere pinprick of blood. At its peak, the company was valued at $10 billion (€8.85 billion).

Holmes positioned herself as a visionary and the heir apparent to Steve Jobs. She graced the covers of glossy magazines and was once estimated by Forbes to have a personal net worth of $4.5 billion.

In 2015, the company’s facade came crumbling down amid questions about its technology and the accuracy of its testing. Holmes was soon revealed to be something of an emperor with no clothes, and her net worth was revised down to $0.

Last year, she was indicted on nine counts of wire fraud and two counts of conspiracy to commit wire fraud. The whole debacle has been described as the greatest scam ever perpetrated in Silicon Valley.

The Inventor: Out for Blood in Silicon Valley – directed by Alex Gibney – features testimony from a number of former Theranos employees, including Irishman Tony Nugent.

Originally from Tallaght in Dublin, Nugent worked at Theranos from 2007 to 2013, where he served as a vice-president of product development and was a named inventor on two patents alongside Elizabeth Holmes.

A self-described “Tallaght cowboy in Silicon Valley”, he has since been thrust into the spotlight after speaking out about his experiences of working in the company.

Nugent graduated from Trinity College in 1985 with a BA in mechanical engineering. After graduation, he worked with Logitech, a company that manufactures computer accessories.

In 1997, he was hired by Cholestech. It had invented a device called the Cholestech LDX, which could perform cholesterol and glucose tests using blood obtained by fingerstick. It was in some ways a predecessor to the device Theranos was hoping to build.

After leaving Cholestech, he spent time consulting and working in a clinical laboratory.

I was never in that big, glossy, shiny building that they showed in the documentary. That was kind of an eye opener for me

In 2007, he was brought into Theranos as a consultant, and was later enlisted to work in research and development. He worked on prototypes of the Edison, the company’s signature blood-testing device.

At the beginning, Theranos was small. “There were probably 60 of us,” says Nugent. “I was never in that big, glossy, shiny building that they showed in the documentary. That was kind of an eye opener for me.”

The board, too, was populated with venture capital types as well as people with experience in the field. That would later change when political heavyweights such as Henry Kissinger, and later US secretary of defence James “Mad Dog” Mattis came on board. At that point, says Nugent, things “became kind of surreal”.

While Holmes would later become known for making lofty pronouncements about the company’s objectives, Nugent says that rhetoric was largely absent from proceedings in the early days.

“There wasn’t as much of this ‘change the world’ type speech at the time,” he says. “It was more block and tackle engineering and chemistry.”

As the company expanded, however, relations began to sour. He felt slighted and disrespected by management.

“Around 2010, they started to bring in a lot of other people who wanted to do more,” he recalls. “Myself and [chief scientist] Ian Gibbons got sidelined and pushed to the side, so to speak. They still wanted us around, but we weren’t at the forefront.” (After being sidelined and demoted, Gibbons later found himself embroiled in a patent lawsuit. He died by suicide in 2013.)

Nugent continued to work with Theranos until 2013 when he was fired by the company’s chief operating officer, Sunny Balwani. “It’s the only job I’ve ever been fired from and it was probably the best one to be fired from,” he says.

Over the next few years, he didn’t pay too much attention to the goings-on at Theranos. He did, however, raise his eyebrows at some of the claims made by Holmes about the Edison’s capabilities, namely that it could deliver results of up to 30 tests in hours.

When Nugent read damning lab-inspection reports published by the US Food and Drug Administration, he was gobsmacked.

It all begs the question: how was Holmes able to attract so much goodwill and trust from investors?

“The VCs have this thing that they back the jockey not the horse,” he explains. “If you bought shares in Jeff Bezos – not in Amazon, but just the concept of Jeff Bezos – and he works for you for the rest of his life, you’d make money on his Amazon shares.”

In 2015, a Wall Street Journal reporter named John Carreyrou published a number of exposés on the start-up’s struggles, which helped precipitate the company’s demise. Nugent reached out to Carreyrou to share his own experiences and consented to being quoted on the record.

“That’s how I got sucked up into the whole story,” he recalls, laughing. “I could have probably stayed quiet and stayed out of it all, but that was it.”

Carreyrou later published a book on the saga entitled Bad Blood: Secrets and Lies in a Silicon Valley Start Up. A film adaptation directed by Adam McKay and starring Jennifer Lawrence is in the works. There has also been a podcast.

Nugent is complimentary of the book and documentary, but doesn’t believe the full story has been told. “You only see your own individual experience and maybe a few around you. I still think there are details to emerge in this whole story.”

As the rest of the world has gobbled up the story, Nugent has been forced to grapple with his time in Theranos. While he “[makes] no apologies” for his work in the company, he says the aftermath has been a “painful process”.

“There is a certain amount of emotion in it for me and sometimes you’re wondering, should I have run away earlier,” he says. “It is what it is.”

At the moment, Nugent is working as a consultant and assessing his next career move. His LinkedIn CV details his six years with Theranos, but includes the following caveat: “(unfortunately became a travesty, saddest item on my resumé)”.