Spud rant and Jasper Carrott interview are like a diet of root vegetables: filling but dull 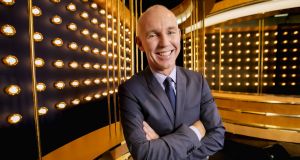 Ray D’Arcy has long been an advocate of healthy eating, as his regular radio slots about television weight loss series Operation Transformation attest. So it’s unsurprising that he should serve up a vegetarian menu on his programme (The Ray D’Arcy Show, RTÉ Radio 1, weekdays). Potato and Carrott, to be precise. It’s an appropriate bill of fare, for, whether it’s his monologue about spuds or his interview with comedian Jasper Carrott, the presenter’s material is like a diet of root vegetables: filling and comforting, but dull after a while.

Actually, that may be a tad unfair. Anyone who can go on a solo riff about the humble tuber inspires a certain kind of awe. On Wednesday, as D’Arcy ponders how Brexit may raise the price of chips, he utilises his full array of talents. His wide range of interests is masked by a faux-befuddled everyman persona. Noting that most potatoes used by Irish chippers come from the UK, he identifies the preferred variety with a textbook humblebrag: “It’s the Maris Piper, isn’t it?” D’Arcy then muses on what might happen in a no-deal Brexit scenario, in leadenly expositional style.

“The price of your bag of chips would go up, which is bad news,” he says. “And of course, you know from years of experience that when they put up the price of chips because of the potatoes going up, they never bring it back down when the price of potatoes goes back down, so it’s up forever.” Uncle Colm, Kevin McAleer’s literal-minded bore from the sitcom Derry Girls, would be proud .

The presenter’s introductory remarks cover more serious matters too. He is clearly upset at the news that Brunei will punish “same-sex intercourse” with death by stoning. Even then, as he talks about the Sultan of Brunei, there’s a superfluous flourish: “He obviously doesn’t like homosexuals.” Obviously.

Meanwhile, the chief virtue of D’Arcy’s interviews with celebrities such as veteran stand-up Carrott is that they fill airtime. They certainly don’t tell the listener much about the guests. Carrott is a genial presence when he appears on Tuesday’s show, but also such an old media hand that he talks about ostensibly personal subjects like his daughter’s kidney transplant and his own recent heart surgery without being revealing in any way. The only ripple of diversion comes when he tells a slightly off-colour joke about his wife’s transplanted kidney being menopausal. “I’d like to distance myself from that joke,” D’Arcy says weakly.

To his credit, D’Arcy knows that he’s not gleaning much from the conversation

That said, the Carrott interview seems like a tabloid tell-all compared to the presenter’s chat with pop impresario Louis Walsh, though even the term “chat” implies an interrogatory rigour absent from the encounter. Instead, the item sounds like an extended plug for Walsh’s various projects, with adjectives like “brilliant”, “huge” and “massive” used with wanton promiscuity. So unstoppable is his guest’s boosterism that D’Arcy ends up being quizzed about his favourite songs: “I’m going to interview you,” says Walsh.

To his credit, his host knows that he’s not gleaning much from the conversation. When Walsh remarks that a guest on D’Arcy’s television chat show “didn’t tell you anything”, the presenter gives a rueful chuckle: “Similar to you, Louis.” Which begs the question: why bother? Sure, there’s a show to fill and Walsh is a famous name, but it really is extraordinarily insipid stuff.

D’Arcy can still show flashes of the spicily attuned broadcaster who used to hold court on Today FM. When Fine Gael TD James Lawless talks about meeting with Facebook chief executive Mark Zuckerberg, D’Arcy gets animated. He complains about the role of social media in the decline of the HPV vaccine and sounds dubious about the effectiveness of Lawless’s exchanges with Zuckerberg. “It’s great you got one up on him and you’re high-fiving yourself in your head,” D’Arcy says to the TD, “but what real effect has it?” It’s bracing to hear him get worked up for a change. He could do with a few more meaty items on his plate.

The Zuckerberg meeting also features on The Late Debate (RTÉ Radio 1, Tuesday-Thursday), with Lawless one of the guests of host Katie Hannon on the political panel show. Like D’Arcy, Hannon is curious how sincere the Facebook boss is about wanting more regulation of social media: “Do we believe him?” Lawless replies it’s hard to know. People Before Profit TD Richard Boyd Barrett, on the other hand, thinks the answer is simple. “I don’t trust his company one bit to deal with toxic content,” he says. “When you look at their attitude to tax, they clearly have no social conscience whatsoever.”

Such robustly articulate exchanges have long made The Late Debate a reliably stimulating forum, which has been subtly reshaped under Hannon’s stewardship. Now the show’s sole presenter, having previously shared the role in a rotating capacity with Sarah McInerney and Fionnuala Sweeney, Hannon maintains a low profile as a moderator. This allows panellists to air their views more expansively than her bellicose predecessor, Cormac Ó hEadhra.

For all her light touch, Hannon steers proceedings with a firm hand when needs be

Discussions accordingly have a pleasing ebb and flow to them. Political analysis of Brexit gives way to journalist Lise Hand explaining chess tactics and Boyd Barrett praising Game of Thrones and, as if to prove Godwin’s Law, invoking the rise of the Nazis in the context of social media.

For all her light touch, Hannon steers proceedings with a firm hand when needs be. She is alive to the danger of getting bogged down in needless distracting detail, shutting down Fine Gael Senator Colm Burke when he starts to reel off rental figures on Wednesday’s show. “We’ve gone down the road of shouting numbers at each other so often,” Hannon says, accusing Burke of the radio world’s gravest offence: “We’re losing listeners.”

It’s an object lesson in putting the audience first, both in terms of clarity of information and quality of output. Not everything that’s good for you has to be bland.

On The Last Word (Today FM), Matt Cooper is balanced in a plague-on-both-your-houses style, but doesn’t often make definitive political statements. During Monday’s discussion on Brexit with British broadcaster Nick Ferrari, however, Cooper sounds his alarm at the “mob element” at weekend pro-Leave demonstrations, particularly a big-screen image of “convicted criminal” Stephen Yaxley-Lennon aka far-right activist Tommy Robinson. Ferrari agrees the protests had a nasty edge, but one listener texts in to dissent.

“‘Tommy Robinson has so much support that the mainstream media won’t report,’” Cooper reads out, before making his disdain clear. “He’s a minority fringe figure. He’s a criminal who’s changed his name. He’s a lout.” Well said. Cooper doesn’t so much get off the fence as tear it down.