The tangle of confusion, hope and fear of school in autumn 2020 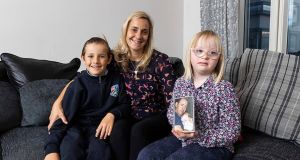 The New Normal became the teensiest bit more like the Old Normal when the schools reopened last month. That was the plan at least. But for children and parents alike, the return to class bang in the middle of a pandemic proved taxing both practically and emotionally.

This tangle of feelings – a slaloming mix of fear, hope, confusion and relief – is captured grippingly in A Big Week In September (RTÉ One, 9.35 pm).

We meet Co Wicklow mother Viviana Verveen (an actor who has appeared in Fair City). Her partner, Breffni Carroll, passed away in a tragic accident in March on the very day lockdown was announced. She has two children – including a daughter Rose (10) with Down Syndrome. Covid has placed everything on ice – not least her grief. Now, with school starting again, it’s all rushing back in.

“I’m not looking forward to being on my own,” she says. “I’ve been surrounded by them for months. It’s been all about them and I’m not too sure what my own company is going to be like. Having to face the grief I’ve held off for months and put down at the bottom of my stomach … It’s going to be tough on those days I’m here on my own.”

In Cork we are introduced to exasperated Coláiste Éamann Rís principal Kevin Barry: “The pleasure is gone out of it. It’s all barking rules — it’s more like being a prison warden than a principal.”

At St Dominic’s College, Ballyfermot, in Dublin, a pupil threatens to leave early because mandatory mask-wearing is causing “depression and anxiety”. “I have rights,” she says.

Then it’s off to Birr, Co Offaly, where mother Pauline O’Grady, an asthmatic, has her world flipped head-over-heels when it emerges a friend has been in close contact with a positive case. You share the relief as she and her husband test negative.

“You see how easily you can become a contact of a confirmed case,” she says. “Is this going to be reality for us all in the weeks, months ahead? Are we going to be getting regular texts every couple of weeks?”

The humour, such as it is, comes from acknowledging the bleakness of the situation. At Abbey Community College in Boyle, Co Roscommon, principal David Harding introduces his new best friends: blue kitchen paper and tissues. Who could have suspected that dystopia, when it finally came, would be so bland – and so steeped in over-the-counter cleaning products?

The challenge of mobilising an entire generation of school-age children is daunting and A Big Week In September captures the sheer scale of the undertaking. However, the sweep of stories covered is ultimately overwhelming. A smarter choice might have been to focus on the more emotionally engaging cases – those of Viviana and Pauline perhaps – and leave some of the rest on the cutting room floor. As it is, there is too much to take in.

Still, the message that life goes on, no matter what, is ultimately affirming.

“We won’t be in the midst of this forever,” says Ballyfermot principal Sarah Green as she drives home, the sun tiny and watery on the horizon. She takes a beat and continues. “Everything will be okay.”