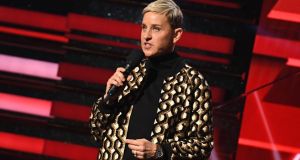 Ellen DeGeneres: ‘I take responsibility for what happens at my show.’ File photograph: Robyn Beck/AFP via Getty

Given the metronomic regularity with which celebrities are forced to publicly apologise these days, you’d think they’d have learned how to do it well by now.

Sometimes they prostrate themselves in front of their critics, issuing a sensitive and heartfelt backtrack. At the other side of the spectrum is a half-hearted “sorry for any offence caused” non-apology pushed out as a damage limitation exercise. Somewhere in the middle lies Ellen DeGeneres’s Mea Culpa.

“How was everybody’s summer? Mine was great. Super terrific,” Ellen offers through gritted teeth by way of an opening gambit for the 18th season of her chat show.

It was nothing if not eventful: in August, a number of misconduct and sexual harassment allegations emerged, turning Ellen’s cuddly and sunny personal brand into something much more toxic and problematic.

Despite her own “be kind” mantra, a picture emerged of a toxic workplace after comedian Kevin T. Porter tweeted about the chat show host being “notoriously one of the meanest people alive”.

Among the claims made on social media by former employees were that “every day [Ellen] picks someone different to really hate”. In July, BuzzFeed published accounts from 36 unnamed former staffers alleging incidents of “harassment, sexual misconduct and assault from top producers”. And for many of them, DeGeneres’s decision to poke the elephant in the room with humour was seen as tone-deaf.

DeGeneres had already apologised to staff during a Zoom meeting in August, and had publicly “vowed to do better”. Yet there was no way that the star couldn’t acknowledge her summer “cancellation” as she returned to work.

Things on her first show after summer hiatus started well, if a little . . . Legalese.

“I learned that things happened here that never should’ve happened,” she said.

“I take that very seriously and I want to say I am so sorry to the people who were affected. I know I am in a position of privilege and power and I know with that comes responsibility and I take responsibility for what happens.”

Glossing over the grim details of the allegations, DeGeneres made sure to remind everyone in her digital audience (composed of a wall of Ellen fans on giant screens) that she’s a lovely person, really.

It felt like too obvious a ploy to win back viewers (and sponsors, and advertisers)

“If that’s ever the case, I’ve let myself down and I’ve hurt myself as well,’ she added, in what must be the first instance of a person calling themselves a victim in the face of such allegations.

This prompted one former employee to react: “Not only did Ellen turn my trauma, turn our trauma, into a joke, she somehow managed to make this about her.”

Things got even weirder as DeGeneres moved on to self-help jargon.

“Being known as the ‘be kind’ lady is a tricky position to be in,” she notes. “The truth is, I am that person that you see on TV. I’m also a lot of other things. Sometimes I get sad. I get mad. I get anxious. I get frustrated. I get impatient. And I am working on all of that. I am a work in progress.”

DeGeneres wrapped things up with talk of “starting a new chapter”, which as everyone knows is code for “let’s forget about all of this immediately and move on”.

There’s probably no right way to acknowledge culpability within the confines of a chat show monologue, but an effective public apology involves the three Rs – reacting to the situation, expressing genuine regret, and reassuring people that it won’t happen again.

Ellen did manage to tick the three Rs off, yet her apology still has the bitter tang of a woman using all the right buzzwords and not really believing any of them. There was too much deflective talk of feeling the love and spreading goodness.

It felt like too obvious a ploy to win back viewers (and sponsors, and advertisers). We sensed too much rescuing of a personal brand with marketing non-sequiturs. And tragically, not enough sign of a concerted effort to really do right by those who have been wronged.