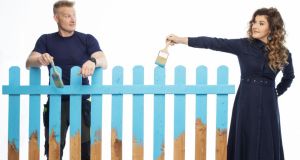 The shadow of national icon and fitted- kitchen fantasist Dermot Bannon hangs heavy over Home Rescue (RTÉ One, Thursday, 7pm). This is essentially Room to Improve minus Bannon, the JRR Tolkien of minimalist extensions, banging on constantly about floor-to-ceiling windows but with a weird undercurrent of tension between its hosts instead. It’s fine – though it could do with being 50 per cent more feel good.

The Bannon stand-ins are architect and designer Róisín Murphy and builder Peter Finn. They are, shall we say, an odd on-screen pairing. Which is another way of saying they spend a fair chunk of this episode arguing in circles. Unfortunately, this isn’t the agreeable kind of friction best enjoyed with feet up and a bowl of popcorn. It’s merely two professionals in close proximity not getting on.

“He’s looking into a late night – and I annoy him because I’m going home,” says Murphy after a passive-aggressive exchange with Finn over time frames and door-frames. “I thought you were going to keep talking to me like a school teacher,” says Finn the following morning. He’s smiling, a bit.

Conflict usually makes TV more watchable. But here it distracts from a genuine human-interest story as Murphy and Finn set about decluttering the kitchen and conservatory of cancer survivor Sinéad.

She and 11-year-old daughter Jodie truly have been through it. Sinéad, a single mother, has battled serious illness, which has forced her to put on hold her mobile hairdressing business. Low energy levels through the day mean she hasn’t been able to keep her house as spick-and-span as she might like. Enter Murphy and Finn who, once they stop disagreeing, repurpose the back of the home as a trendy chill-out zone.

It’s lovely and viewers will share in the delight of the likable mother and daughter team. However, the stormy atmosphere between Murphy and Finn takes the shine off slightly. It’s their relationship that could really do with a spring clean.