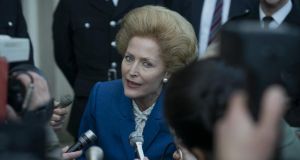 In one respect at least, Margaret Thatcher has caught up with her political hero. Like Winston Churchill (always “Winston” to the eventual Baroness), she has provided actors with a reliable, apparently inexhaustible challenge for their middle and later years.

This weekend, in season four of The Crown, Gillian Anderson becomes the latest to wrestle with the blue suit and tortured vowels. The Anglo-American joins a club that includes such distinguished forebears as Lesley Manville, Andrea Riseborough, Lindsay Duncan, Patricia Hodge, Sylvia Syms, Maureen Lipman, Anna Massey and — winner of an Oscar for her performance — Meryl Streep. No other woman in 20th century British life has attracted such a classy front bench.

Churchill is probably still ahead. Richard Burton, Brendan Gleeson, Timothy Spall, Michael Gambon, Brian Cox, Robert Hardy, John Lithgow and — winner of his own Oscar — Gary Oldman have stuffed pillows up waistcoats and clamped lips round a Cuban corona. There are two Irishmen, one Welshman, a Scot and an American in that incomplete list. Have you reached a certain age? Then have a go.

What is going on? You would, Adolf Hitler aside, struggle to find two other political personalities so appealing to film and television professionals. The Americans have not gone after FDR or Nixon with the same vigour. The French have had less to do with General de Gaulle.

The nearest Irish equivalent to Mrs Thatcher — a figure from late 20th-chentury politics who inspires as much revulsion as devotion — is, tantalisingly, her great antagonist Charlie Haughey. Aiden Gillen was oily on television in Charlie. Patrick Malahide played an apparent variation on Haughey in Sebastian Barry’s Hinterland. But Irish creatives haven’t gone big on CJ the way the British (and some Americans) have grabbed Winret Thatchill.

The controversy draws actors and producers back to Thatcher


It is tempting to attribute the twin appeal of those Tory prime ministers to a reactionary yearning for the return of empire. It is certainly true that the various Churchill stories have focused on the war years and dealt little with that politician’s well-documented list of imperial atrocities. Brendan Gleeson faces up to his legacy in Into the Storm. Brian Cox worries about the Normandy landings in Churchill. Gary Oldman recovers from Dunkirk in Darkest Hour. Nobody is buying scripts about Churchill’s involvement with the disastrous landings at Gallipoli during the first World War.

The continuing (indeed growing) interest in Margaret Thatcher is harder to parse, not least because so many of the representations have been unflattering. Whereas the Churchill dramas have elbowed the outrages to one side, the Thatcher pics have revelled in the first female prime minister’s appetite for discord. Meryl Streep bickered frantically throughout the absurdly rushed The Iron Lady. Lindsay Duncan indulged a class of Shakespearean gloom in the 2009 TV movie Margaret.

The fate of Ian Curteis’s troubled The Falklands Play gives some indication of broadcasters’ ambivalent view of the Thatcher ascendancy. Generally favourable to its protagonist, the BBC play was cancelled in the mid-1980s and didn’t see the light of day until 2002. Patricia Hodge’s PM remains, for good or ill, the only unambiguously heroic depiction of Thatcher in a major feature film or TV play.

The controversy draws actors and producers back to Thatcher. There was never a shortage of drama during her premiership. But something else is going on. Like Churchill, Margaret Thatcher was a figure of such heightened theatricality that, even when filtered through the psyches of actors decades her junior, the personality bleaches out all other attending characters. Both the war leader and the hammer of Grantham constructed — or were helped to construct — personae as overpowering, as singular, as downright weird as anything in Lord of the Rings.

Churchill had his cigars, his V-signs, his siren suit and his capacity to drink brandy as other men breathe oxygen. She had her rising intonations, her helmet of lacquered hair, her stratospheric rudeness and her unyielding stare (though François Mitterand’s suggestion that she had “the eyes of Caligula and the mouth of Marilyn Monroe” was surely overcooking things). Clement Attlee may be equally deserving of a biopic, but good luck illuminating the screen with that famously undemonstrative temperament.

So bold are the defining characteristics that actors have struggled to make fleshy personalities of either PM. A version of Churchill-acting — blubbery delivery and lowered brow — emerged in the 1960s and has never gone away. Thatcher-acting, as much to do with handbag manipulation as vocal control, is now as codified as Hitler-acting or Santa Claus-acting. The costume does a large part of the work.

All of which confirms that it will be a challenge for Gillian Anderson to mark out ground of her own. The actor who did the most convincing job of making Thatcher a human being was Andrea Riseborough in the excellent The Long Walk to Finchley from 2008. That fine actor was, however, dealing with the politician before she had been formed into the semi-authentic entity that stirred so much unease in the 1980s.