Television: Wolf Hall is not your usual bodice ripper

The BBC’s Tudor drama is literate and atmospheric; an Irish documentary on being gay is quietly powerful when it stays on home ground; and the last word on RTÉ’s ‘Charlie’ 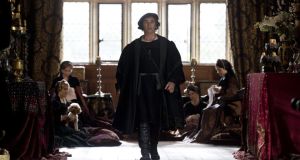 Pare it back and it’s the oldest story of all: power, loyalty and betrayal, the rise of a man from humble beginnings to the top table. Charlie, obviously, of which an astonishing amount has been written, but also Wolf Hall (BBC Two, Wednesday), the earnestly good adaptation of Hilary Mantel’s two Man Booker Prize-winning doorstops.

Peter Straughan, who did Tinker Tailor Soldier Spy in 2011, has adapted them for TV; he delivers the complex machinations at Henry VIII’s court and the rise of Thomas Cromwell with pared-back storytelling. It looks beautiful and has the intrigue of a modern political thriller, with snappy, colloquial dialogue that owes more to contemporary drama than ye-olde-English pastiche.

At its centre is the magnetic, scene-stealing Mark Rylance as Cromwell, a character often presented as a pantomime baddie, a church-wrecking foil to the saintly Thomas More. Here, though, he’s a nuanced, fully drawn character.

Scenes of Cromwell’s childhood in Putney – a byword then for dead common, apparently – when he was beaten by his blacksmith father, hammer home how far this enigma has already come. If you don’t weep a little at the harrowing scenes of his wife and children’s deaths – when it wants to, this drama plays you like a lute, and there’s quite a lot of beautiful lute-playing – then you’re as tough as the flinty, modern-miss Anne Boleyn (Claire Foy).

We first see Cromwell in classic consigliere mode, whispering advice to his patron, the ostentatiously bejewelled, pre-Reformation Cardinal Wolsey (watery-eyed Jonathan Pryce, never better). Wolsey is to be banished for failing to secure an annulment from the pope so that Henry can marry the hopefully fertile Anne Bolyen. With his patron out of favour, Cromwell begins the process of working his way into the centre of the court of Henry VIII (played by Homeland’s Damian Lewis).

Wolf Hall is slow, with time shifts that demand concentration. It’s not like the cable-TV period romps we’ve become familiar with, and not just because in Wolf Hall everyone keeps their clothes on – so far, anyway. It’s old-school BBC period drama. They may tell the same story, but Wolf Hall is to The Tudors what True Detective is to Police Academy II.

The timing of Coming Out of the Curve (RTÉ Two, Monday) couldn’t be better. Broadcast the day after Minister for Health Leo Varadkar’s coming-out radio interview, it is fronted by Donal Óg Cusack, the first openly gay Irish sports superstar. He’s a terrific presenter, relaxed yet passionate, and clearly happy to have arrived at the place he’s in, where he says that being gay doesn’t define him and that “Irish society has changed enough now for me to live the life I want to live”.

The frank interviewees range from gay teenagers in a support group to a young rugby-playing garda to a man in his 60s who was married for 28 years, in a different Ireland, before coming out. An interview with the Cork footballer Valerie Mulcahy closes the programme; with shots of her and her girlfriend, it is uplifting in its honesty and ordinariness – inspirational, role-model stuff.

Coming Out of the Curve drops the ball when it heads to Russia and the US for lengthy segments to talk to the same sort of official-policy homophobes and pray-away- the-gay wingnuts we’ve endured many times before. They come across as entirely irrelevant to the personal Irish stories being told. The documentary doesn’t need to travel so far to find nonacceptance of homosexuality, and it seems a cop-out that it does.

Remember, it was also the week when a teacher won a case at the Equality Tribunal because she was asked during a job interview: “What about the homos?” I’d have been more interested to see that interviewer being asked about her views, or hearing from the hurling fans in the stands who chanted “You’re bent, you’re queer” at Cusack, than their Russian or US equivalents.

And just to add to the word count on Charlie (RTÉ One, Sunday), now that the trilogy is over: it tried to do too much. It packed too many people and events on screen, so that the drama, particularly in the first episode, was mostly lost in a crowded confusion of beige suits, clunky exposition, and characters and events that were alluded to but never shown.

As PJ Mara (a similar role to Cromwell, but a pussy in comparison) Tom Vaughan-Lawlor had an impossible task: to shake off Nidge so soon after he owned our screens in Love/Hate. Aiden Gillen nailed it as CJ Haughey, however, through his look, mannerisms and, especially, his voice.

This week’s final episode was calmer, less of a giddy romp than episode two, and the best of the three because it pared the story right back to chart Haughey’s obsession with his legacy and his ultimate downfall.

Historians will quibble about the appearance of the arms-trial folder, which was presented as a trigger for Haughey’s resignation, although it worked in terms of storytelling. Other dramatic elements also elevated this episode from being another compilation of facts: the melancholy visions of his mother, and the surreal ending of him opening a door in his mansion and seeing waves destroy a sandcastle, a symbol of all he had built up.

Unlike its subject, Charlie redeemed itself at the end.

Ones to Watch: The Good Wife returns, and Arctic chills

Unthinkable: How many emotions can one person feel?
9