Television: Who knew Tolstoy could be such a romp? 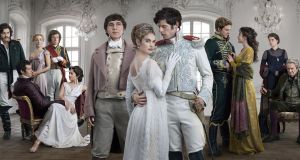 Downton Abbey joins the revolution: the stars of War and Peace

Who knew Tolstoy could be such a romp? The ostentatiously opulent War and Peace (BBC One, Sunday) is a big, bold and beautiful adaptation of the epic novel for an audience primed by big-house dramas and lush takes on Jane Austen and Charles Dickens.

Set in Russia in the early 1800s, War and Peace features gorgeous young men with razor-blade cheekbones, floppy hair and tight britches, plus beautiful young women who delicately heave their bosoms as they wait for a perfect match.

If it weren’t for the bear wrestling (the bare wrestling will come later), the hints of incest and the “Kiss me, Boris” dialogue, this could be any number of visually stunning, perfectly acted English period dramas. But War and Peace is on a grander scale, set in jaw-droppingly fabulous palaces. The bill for the fur and brocade alone could probably have funded an episode of RTÉ’s Rebellion.

It’s all Fabergé-egg gorgeousness until towards the end of the first of six episodes, when the “war” part of the title kicks in with stunning, cinematic battle scenes, as France gains ground on a poorly equipped Russian army. Even the horses die dramatically.

Stephen Rea is magnetic as the scheming Prince Vassily Kuragin, and the modern, easy-to-follow dialogue zings whenever he’s in a scene with the pushy mother Anna Mikhailovna (Rebecca Front).

Napoleon arrives next week. That’ll be worth tuning in for, as well as to see how the naive, idealistic Pierre Bezukhov (Paul Dano) fares. Pierre is the only young man who isn’t Burberry-model handsome, but his vast inheritance makes him easy prey in St Petersburg, a hotbed of greed and power. You’d nearly be tempted to read the book.

By the time Rebellion (RTÉ One, Sunday) hit our screens RTÉ had made it clear that its new period drama isn’t a history lesson and that the main players are imagined Dubliners, not the signatories to the Proclamation. And although it’s standard for period dramas to humanise historical events through fictional characters, in this year of commemoration it is brave of Colin Teevan, its writer, to take a different cut from this sacred cow.

Rebellion, on the strength of the first episode, is an impressive piece of drama. Aku Louhimies’s superb direction deftly introduces its many characters, as well as clearly establishing the social and political backdrop in the Dublin of 1916. Through a seamless series of short scenes the action builds to create a sense of everyone hurtling towards something as yet hazily defined.

This is a lush, classy production, from the set-piece scenes – the tenement rooms look grimly authentic – to the beautiful costumes. At the start the three central figures (women, refreshingly) sing God Save the King with varying degrees of enthusiasm as a bell tolls the outbreak of the first World War.

When we next see them, two years later, the dutiful singer, a middle-class medical student named Elizabeth (Charlie Murphy), is given a gun by Countess Markievicz. The reluctant singer, Frances (Ruth Bradley), is in a Cumann na mBan uniform, haranguing returning British soldiers on the Dublin quays. And the enthusiastic singer, a civil servant named May (Sarah Greene), is pregnant by her Dublin Castle boss.

How Elizabeth and Frances became radicalised isn’t explained, but May’s conversion to the cause of Irish freedom – she leaks a document to the rebels – comes after she feels scorned. The sketchy character development is compensated for by the actors’ vivid, convincing performances.

The two men from the Rebellion poster are the familiar dramatic device of warring brothers. Arthur (the terrific Barry Ward) is in the British army, home from the front; Jimmy (Brian Gleeson) is in the Irish Citizen Army, prepping for war at home.

Of the two it is Arthur who appears the more principled and honest, taking the king’s shilling to feed his family, fighting for the Ireland he lives in, not the one imagined by his socialist revolutionary brother. Jimmy, who moons over posh Elizabeth, has a roof over his head thanks only to Arthur’s army pay and – shamefully, surely – the pittance that his niece earns at the laundry where he got her a job.

Some scenes are hammy and unintentionally funny. Surprisingly, they come when real 1916 characters make appearances, including James Connolly’s “ye poufter buffoon” confrontation with a detective and the almost cartoonish portrayal of Countess Markievicz as a butch woman stuffed into a girl guide’s uniform, doling out guns and whiskey to women recruits.

Several cliffhangers propel Rebellion into next week: will the Rising happen? Will Jimmy be more heroic in the GPO than he is at home? Will it all go down in time to save Elizabeth from the marriage her family wants for her? Has May’s treason been rumbled and is she in chains in Kilmainham? And then, right after the credits, the trailer for part two is one great big spoiler.

There is a metaphor to be forced, with the GPO being opposite Clerys, about the little guy unable to hold either when the battle comes. But it’s best to simply say that Clerys (RTÉ One, Monday) is a timely, surprisingly moving and superbly crafted documentary. Its producer and director, Judy Kelly, follows the closure in 2015 of the landmark department store, sentimentally loved by Dubliners but increasingly off their shopping lists.

Told from the point of view of the workers, it humanises a business story that is the definition of capitalism red in tooth and claw. The owners used a perfectly legal accounting mechanism to shut the store, and 460 workers found themselves unemployed overnight. The Clerys owners – villains of the piece, according to workers and concession owners, but admired by an insolvency solicitor – aren’t interviewed, but it doesn’t matter. Had it not been them it would have been someone else. The store was a relic, and the workers would still have come out on the losing side.