Review: Twenty-five years after the first ‘Simply Delicious’, the chef and her brother cook up some festive family fare 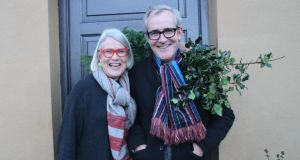 ’Tis the season for cookery shows to clog up the schedules, like fat in an artery, promising inventive ways with turkey and interesting things to do with sprouts. Darina Allen was at it long before Neven Maguire lifted a spatula and when Donal Skeahan still had his baby teeth. Her first Simply Delicious programme for RTÉ was a quarter of a century ago, so despite the seasonal smorgasbord on offer it has to be her A Simply Delicious Christmas (RTÉ One, Wednesday).

This time she’s promising “new flavours for an old-fashioned Christmas”. Presented with her brother, the chef Rory O’Connell, the show is delightfully dotty, borderline eccentric and very posh. Allen pronounces chorizo the Spanish way, with a “th” instead of our “so” – it’s that posh – and her soup is made with Jerusalem artichokes. The starter is a far-from-that-we- were-reared “oysters with southeast Asian hot dressing”. (Try persuading the family to slurp that down on Christmas Day when they’re expecting a nice bit of smoked salmon on brown bread.)

Standing behind the large worktop, the siblings are giddy with each other. Allen laughs like a drain at his quips, throwing her head back, mouth open molar-revealingly wide. It all looks quite liberating.

She wears her signature red glasses and is quite dressed up for someone frying chor-i-tho. I seem to remember her wearing an apron in the old, more earnest days.

The pair couldn’t be more relaxed if they were in their own country kitchen. (Maybe they are; it’s not clear.)

Little indication is given of what heat to cook anything at (should that spiced beef be in the oven for one or three hours?), and few measurements are mentioned, as if that sort of thing were incidental (do you need three eggs or 10 for the meringue, and a spoonful of sugar or a bag?). But it all looks disarmingly easy – and you can track down the quantities on the website afterwards.

I want O’Connell to get his own cookery show. “You’re not warming it, you’re making it less cold,” he says while manhandling some biscuit dough, which has a happy way of seeming to mean nothing at all. The chilli, he tells us, is “enthusiastically hot”.

Allen mostly wanders in and out of shot as his sous-chef – as enthusiastic as the hottest chilli, helping in a sisterly sort of way: “Show me exactly what you want me do, because I don’t want you cribbing.” It’s a hoot. They’re not that ditzy, though; they throw in a couple of mentions of their business, which is said as if we all know what Ballymaloe is. (Which, of course, almost all viewers do.) I could watch this double act all evening.

Singing a republican song in a crowded bar wasn’t so much a party trick for Brendan Behan as an image that defined him, and one that has shaped his legacy. The actor Adrian Dunbar’s terrific documentary Brendan Behan: The Roaring Boy (Monday, RTÉ One), directed by Maurice Sweeney, does the writer some service by going behind the bowsy-borstal-boy-and- boozer image to find the serious, prolific writer who achieved meteoric success in London in the 1950s, in the West End, and in the US, on Broadway, and who was also a man of deep personal complexity.

“I’m essentially a gloomy man, a shy man,” Behan says in one of the many archive clips and photographs that bring this film vividly to life. The personal recollections of some contributors, including Jim Sheridan and JP Donleavy, give the direct links that always add heft to a biographical film. Other contributors, such as the actor and theatre director Kathy Burke, are fans, putting his plays, such as The Hostage and The Quare Fellow, in a cultural and artistic context.

The segment on his visits to New York is particularly poignant – New York killed him, says more than one contributor. It’s where he had the money to drink, the adulation to feed his ego and, having left his wife at home, the freedom to enjoy the city’s burgeoning gay scene.

“He gave nightly performances of his most convincing character,” says Dunbar. He was originally feted by the New York literary crowd, staying at the Algonquin and hanging out with Norman Mailer and Allen Ginsberg, but by his third visit, in 1963, everyone was sick of him and his drinking. His final filmed interview, just before his death, at 41, shows how reduced he was, looking 20 years older than his age.

The Roaring Boy inevitably ends on a melancholy note, which might not have made Behan happy; as an artist he wanted to make people think while he entertained them. “People,” he says in another of those terrific archive clips, “don’t go to the theatre to cry their eyes out.”

There’s a lot to like in the new series Bressie’s Teenage Kicks (Tuesday, RTÉ2). It’s a familiar TV format: a film crew gets a disparate, gobby but (unknowingly) talented group of people to come together to perform. It’s like The X Factor with a conscience. The Choir, the BBC series with Gareth Malone, which in its best-known series put servicemen’s spouses together to sing, as Military Wives, is the most successful take on this.

The format has a tendency to light on a disadvantaged location. Bressie’s Teenage Kicks heads to Moyross, in Limerick – a go-to impoverished area for the media. Setting it there either gives the teenagers a chance or stigmatises them more, depending on your point of view.

Niall Breslin is great to watch, because it’s impossible to be cynical or suspicious of his motives when you see him relating to the teenagers.

He came, he says, with one vision of the sort of band he wanted, but at the auditions the different styles of singing and performance, from rappers to belting torch singers, make him reassess.

Breslin doesn’t come with the swagger of someone who thinks he’s going to transform lives – which is usually the teething-grindingly annoying dynamic in these shows. And the teenagers are refreshingly honest. Asked why she wants to audition for Breslin’s band, one girl says it’s because she wants to be famous; another, eyes filling with tears, says she wants to get noticed by her mother.

Bressie’s Teenage Kicks is an interesting watch because he and his assistants, the musicians May Kay and Ronan Nolan – and the mouthy, tricky-to-control would-be band member – seem to be feeling their way through a project that may or may not work but vibrates with energy.

Ones to Watch: He didn’t do it
The murder of Joanna Yeates, in England, is so recent – 2010 – that many people will still have an image of one of the first suspects, her landlord, in their minds. He didn’t do it, and the two-part drama The Lost Honour of Christopher Jefferies (UTV, Wednesday and Thursday), starring Jason Watkins, explores the impact of the accusation on the teacher. A timely documentary, Through the Roof: Rental Crisis (RTÉ2, Monday), explores the reality of spiralling rents through the personal stories of frustrated and desperate renters.