Teen nostalgia: Self-soothing through the pandemic with Hannah Montana 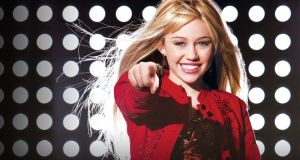 Nostalgia is for geezers and wrinklies, but the young want what’s new and they want it now. They don’t look back, and they ruthlessly shed the toys and books and games that gave them joy only a week before. Which is why junior infants can go from adoring Barney to despising him overnight.

Now, with teenagers under “house arrest” as a result of coronavirus, weird, unsettling things have happened in their world. Non-virtual friend groups are reduced to annoying siblings and (cringe) embarrassing parents. No shopping. No discos. No sleepovers. No sport. Even, dammit, no school.

And strangest of all, if the 15-year-old in our house is any indication, this novelty-obsessed age group has embraced nostalgia via the comfort TV of their distant pre-teen selves.

Sure, she still cackles at TikToker Jaffa Man’s hilarious take on Irish mammies imploding under lockdown. But, perhaps instinctively, she is also self-soothing her way through the pandemic by calling on Hannah Montana, Lizzie Maguire, Zac and Cody, and other friendly faces from her past.

Thank Disney in part. Ireland’s first case of coronavirus was announced on February 29th. Schools were last open on March 12th. Disney+ streaming launched in Ireland and much of Europe on March 24th.

Before Covid-19 hit Ireland, the 15-year-old (who is speaking on condition of strict anonymity) wanted Disney+ only long enough to binge on the mind-bendingly meta High School Musical – The Musical: The Series. (Trumpets Disney: “For the first time ever, East High Wildcats put on a production of High School Musical: The Musical!” And if Grandad is baffled by that, maybe it’s time for a doze by the wireless.)

Now, though, with time on her hands and Disney’s library of childhood TV shows suddenly at her fingertips, the 15-year-old isn’t cancelling anytime soon.

How does she explain her surprising return to the squeaky clean telly of her “youth”? Is it the equivalent of snuggling under the duvet until the storm passes, a way of coping with the frustration of being unable to meet up with friends and swagger around town? Well, uhh…

“It’s also just boredom, in my opinion. But these are still good shows; the funniest ones hold up well. Disney is great for that. I remember these old shows, but some of my friends are more into Marvel, Star Wars, Pixar. No, you can’t talk to any of them.”

This rare heart-to-heart, conducted as she edges out of the room, is cut off by a wail. “Ohmygod, why’s my Snapchat suddenly broken? Literally? Broken?”

After much haggling, she agrees to deliver up a few friends as sources – as long as she can feed them the questions and I don’t ID them in any way other than they live in Leinster. This breakthrough is achieved with a bribe too feeble to repeat here. (Oh alright: I say she can order something off Boohoo.)

One 14-year-old friend has definitely got with the self-soothing. “Phineas & Ferb,” he says when asked to name his favourite Disney show to stream. “It’s making me feel like a child again.” (The animated Phineas & Ferb ended in the mist-shrouded year of 2015.)

“It’s fun revisiting stuff from childhood,” the candid lad adds. “I’d forgot how good they are.” In a sense, he owes the virus a debt: “Otherwise I wouldn’t have as much free time. I’d say I wouldn’t have even got it” – Disney+, that is.

Another 14-year-old friend says her current favourite binge on Disney+ is also nostalgic, sort of: the Star Wars spin-off The Mandalorian. “It’s really great having Star Wars brought back in a TV show,” she allows.

Would she be bingeing on Disney+ if there was no lockdown and she was in school where she belongs? “Ahahaha. Like I might a little bit but not as much as I am now…I’ve seen most of the good stuff on Netflix so it’s nice having a new streaming service.”

Rejoining the household smack in the middle of a global pandemic is the 15-year-old’s sister, who is four years older. Niamh, who has returned to the sleepy Louth countryside after nine months living in Dublin, has already fused with little sister in a deep dive through Disney’s back catalogue of 98 Hannah Montana episodes. And when those have been picked over, there’s still plenty of Wizards of Waverly Place to get through, as well as old Mary Kate and Ashley videos.

(Niamh is also surviving the stress by rereading her tattered Jacqueline Wilson books, though Dustbin Baby, the first one plucked off the shelf, is hardly a barrel of escapist laughs.)

At 19, Niamh is more forthcoming and doesn’t sigh as much as the 15-year-old when questioned. “It is sort of comforting,” she says about losing herself in these old kids shows. “For a lot of people, they’re a way of escaping into ‘the past’ because they don’t like the current present.”

As the lockdown drags on, Niamh says she looks for a balance between relaxing and staying active, physically and intellectually.

“Old hobbies, whether its reading, doing art or watching kids TV, is soothing. But taking up new hobbies” – in her case, marathon training and improving her German online – “gives you excitement and motivation. I think all those things taken together will get teenagers through the lockdown.”

Irish Times parenting expert John Sharry has also noticed that, amid all the upheaval, the past is soothing for young as well as old. In these days of change, “maybe there is comfort in nostalgia for all of us”, he tells me in an email. Sharry is enjoying rewatching some of “old classics” – The Great Escape, the original Star Wars – with his two sons. “It’s nostalgic for me, and my boys like it that I’m watching with them.”

Still, when it comes to teenagers, even if everything old is potentially new again, anything new is, like, the best.

The latest shiny toy the 15-year-old and her friends are obsessing over is Netflix’s virtual pyjama party, which synchronises streaming between subscribers and adds a group chat to the mix. Which means they can ignore the inappropriate horror movie unspooling in front of them and gab away to each other just as if they were in the same room.

The 15-year-old doesn’t yet know the maximum number of friends who can pile onto the view and chat at once, but she does know this: