He interviews both ministers and hairdressers with professionalism and passion 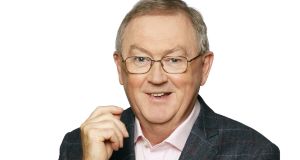 As he works out his final week as a radio host, Sean O’Rourke finds himself back where he’s always been most comfortable – at the cutting edge of news, covering the big story of the day.

However, the cutting edge story in question is just that, an item about hairdressing. On Wednesday’s programme (Today with Sean O’Rourke, RTÉ Radio 1, weekdays), the presenter addresses an issue that, like so much of our current situation, would have seemed an implausible joke a couple of months ago, but which is now a matter of public importance: the growing black market for hairdressers’ services.

On the face of things, discussing rogue hair stylists might seem like a cruelly pathetic way for O’Rourke to finish his heavyweight career as a reporter and presenter. But if the newsman who got under the skin of Donald Trump feels the topic is beneath him, he shows no sign of it. In fact, O’Rourke’s handling of the story is nicely judged as he comes at it from several angles.

Unsurprisingly, he covers the public health aspect in detail, talking to virologist Kim Roberts of Trinity College about the implications of stylists dealing with customers. But he’s equally engaged withDanielle Kennedy of the Irish Hairdressers Federation, especially when she says fellow professionals are being offered up to four times their usual fee for a sneaky ’do. “Some people might find that irresistible,” the host says, in an impressed tone suggesting he could be tempted himself.

Still, there’s no trace of condescension as O’Rourke hears Kennedy describe the bond between hairdressers and clients. She puts the case for salons reopening before the proposed date of July 20th, but also makes clear why people are willing to indulge in the illicit haircare trade.

Far from being trivial, O’Rourke presents this as a pressing issue. Compared with the gun-toting extremists storming US state capitols spouting slogans about liberty, getting a cut and colour on the sly is a far more benign form of anti-lockdown defiance. But it speaks of the frustrations bubbling under the surface. Live free or dye, so to speak.

Overall, O’Rourke’s performance reminds listeners why he’ll be missed. He helms lively discussions on other Covid-related topics, from the fate of the Leaving Certificate to the treatment of the elderly. He conducts a wide-ranging and suitably robust interview with Tánaiste Simon Coveney, only becoming wrong-footed when his guest wishes him a happy retirement. “Oh God,” says O’Rourke, sounding mortified at a politician offering him good wishes.

He also shows his empathetic side, when an ostensibly diverting item with Aslan vocalist Christy Dignam takes a melancholy turn. Dignam is talking about his “lockdown anthem” – a Leo Sayer song, surprisingly enough – when he reveals that his father is “at death’s door” having caught the virus.

O’Rourke’s hitherto jaunty tone gives way to one of genuine sympathy, while his obviously saddened guest tries to be philosophical: “It’s just the cycle of life.” (Unfortunately, Dignam’s father died later on Wednesday.) But O’Rourke largely stands back as Dignam’s emotionally dignified appearance underlines how Coronavirus is, at bottom, a colossal human tragedy.

O’Rourke’s signature style has been his combative approach to slippery pols, it’s clearly fuelled by an old-fashioned journalistic passion for the job and the truth

The highlight perhaps comes when O’Rourke gives a glimpse of the drive – and verve – behind his poised persona, during an interview with new Sunday Independent editor Alan English. O’Rourke recounts how English, who formerly edited the Limerick Leader, allowed him as the then-host of the News at One to scoop his colleague Pat Kenny by airing a tape featuring ex-Fianna Fáil minister Willie O’Dea making libelous claims about an electoral rival.

“I ran around the newsroom, punching the air and shouting ‘yes!’,” O’Rourke recalls.

For all that O’Rourke’s signature style has been his combative approach to slippery pols, it’s clearly fuelled by an old-fashioned journalistic passion for the job and, yes, the truth. As the capable Sarah McInerney steps in as temporary replacement, listeners must hope they’ll be as well served by O’Rourke’s permanent successor.

Matt Cooper may not possess quite the same air of understated authority as O’Rourke, but his show The Last Word (Today FM, weekdays) is quietly probing the latest developments in the pandemic.

On Wednesday, Cooper speaks to Dr Nick Flynn about the efficacy of the Covid-19 testing system. The Cork GP describes some disturbing lacunae in the system: how, after several days of delay, he had to seek out the test results for a health worker himself.

As Cooper points out, such lags may lead to unnecessary self-isolation for much-needed front-line staff. Moreover, his guest remarks that while most results came back more quickly, it isn’t possible to isolate the virus if all tests aren’t processed promptly: “We’re only as strong as our weakest link.”

It’s a sober, factual item, its central point all the clearer for that. As Flynn says, “To come out of lockdown safely, we’ll need testing and tracing to work very efficiently.”

How best to trace suspected Covid-19 cases is examined on Tuesday, when Cooper talks to Andy O’Donoghue about the proposed app for that purpose. As is usually the case in such matters, it’s both astonishing and disturbing to hear how much smartphones can tell others about our behaviour. O’Donoghue explains in simple language how the app should work, with users alerted if their phone has been in close proximity to someone with the virus.

Health benefits aside, O’Donoghue thinks the new Irish app also allays privacy fears. The data will not be stored by the State, he says, as the app will be a privately run, “decentralised” enterprise.

Perhaps surprisingly, Cooper doesn’t ask whether this raises the risks of “surveillance capitalism”, an issue as troubling in its own way as an intrusive state. Cutting hair is one thing, but current-affairs presenters need to keep a sharp eye on other matters too.

On Wednesday, Ryan Tubridy (RTÉ Radio 1, weekdays) interviews Scottish actor Brian Cox, to invigorating effect. Speaking from the US, Cox talks about his Irish ancestry (he calls himself a “Mick Mac”), voices his ambivalence about the royal family (despite accepting a CBE), skewers Donald Trump and excoriates the appalling class divisions in the States and beyond. Far from being preachy, Cox is an appealingly playful presence.

Eventually Tubridy asks about his guest’s career, notably his role as serial killer Hannibal Lecter in the 1986 movie Manhunter. Comparing his chillingly low-key performance to Anthony Hopkins’s showier, Oscar-winning turn as Lecter, Cox says: “Tony played him as mad, I played him as insane.”

Amid everything, Cox’s enjoyably candid interview is an oasis of sanity.

Ellie Goulding: ‘I was made to feel like a sexual object’
3

The power of literature in a time of plague
7