TV review: Who can object to a show that gives us Jennifer Connelly as a neurotic anti-hero? 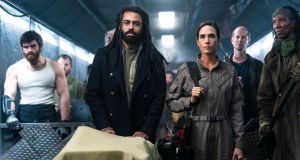 Snowpiercer: the Netflix series chugs ahead on all cylinders as it returns for an enjoyable second run

“Comfort viewing” takes on a whole new meaning in a year of seemingly never-ending lockdowns. Netflix, for instance, may have thought it had a surefire dystopian hit on its hands when it originally green-lit a small-screen adaptation of Snowpiercer, Bong Joon-Ho’s postapocalyptic train caper.

But that was very much then. Today, many of us would trade a vital organ or beloved family pet for the opportunity to board a train that never stopped. Granted, the catering on the Snowpiercer is distinctly subpar. And nobody gets thrown off for rowdy behaviour. But a one-way ticket would at least get us out of the house for a bit.

Bong’s 2013 film – itself based on a cult graphic novel – was allegorical and sharply observed. The TV series, by contrast, is all about the bumpy journey and is full of over-the-top dialogue, sudden interruptions and an ever-present doom. In other words, it’s Mad Max: The All Ireland Final Matchday Special (released in some territories as Mad Max: Beyond Limerick Junction).

Yet it nonetheless chugs ahead on all cylinders as it returns today for an enjoyable second run (new episodes arriving weekly). Who can object to a show that gives us Jennifer Connelly as a neurotic anti-hero? Or Sean Bean as an over-the-top baddie who likes to unwind by listening to David Bowie in the bath?

Bean’s Mr Wilford was introduced at the end of season one as a Wizard of Oz figure nefariously pulling the strings offstage. He’s the obsessive genius who created the Snowpiercer, a last bastion for humanity as Earth is laid waste by a never-ending nuclear winter.

Now he’s back as the captain of his own train. That’s “Big Alice”, a supply engine that has just shunted into the Snowpiercer, bringing it to a halt. We are also introduced to Willard’s enforcer Alex (Rowan Blanchard) – the rebellious daughter of Connelly’s “head of hospitality”, Melanie Cavill (and, awkwardly, Wilford’s usurper on Snowpiercer).

Connelly is nominally the star, but in the first of the new instalments she doesn’t get to do much beyond react to events. Wilford confronts her; her daughter defies her; she almost freezes to death when booby-trapping the Snowpiercer to prevent Wilford seizing complete control.

But her star power cuts through a somewhat underwritten character. Bean is wonderful, too, and the scenes between Wilford and Melanie crackle with drama. It’s enough to paper over some of the show’s flaws, such as the sluggish pacing.

Netflix dramas often suffer from rushed endings, and Snowpiercer may ultimately be on a fast track to nowhere. But the lively beginning to series two suggests that, whatever the future holds, for now this remains a trip worth taking.