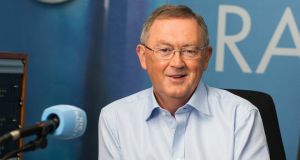 Sean O’Rourke: excited at the prospect of getting stuck into the Brexit action

Whoever came up with the adage that no news is good news clearly hasn’t been listening to the coverage of Brexit. Despite near-apocalyptic predictions about what will happen if the UK leaves the EU without a deal, there’s a distinctly giddy air on Morning Ireland (RTÉ Radio 1, weekdays) in the aftermath of the parliamentary debacle that brings such an eventuality closer. So keen is co-anchor Bryan Dobson to get going on Wednesday morning that he begins to introduce the programme over an advertisement, before the pips have started. For some at least, bad news is a good thing.

In fairness, the massive defeat of Theresa May’s Brexit deal in Westminster results in Morning Ireland having more crackle and urgency than usual. Audrey Carville co-presents from London, her presence helping convey the febrile atmosphere on the ground. As Channel 4 reporter Gary Gibbon says to her, “The hurricane has made land.” Carville feels the impact. She notes that during her interview with political analyst Dr Alan Wager “we were briefly joined by a Brexit  protester”. It’s a credit to Carville’s on-air unflappability that the audience would hardly have known this, as she doesn’t miss a beat during her conversation.

Reporter Louise Byrne also captures the mood with a startling clip of pro-Brexit protesters chanting “We’ve got a better flag than you”, as though taunting a rival football team. Such moments may be a sad reflection of the current state of affairs in Britain. But they are more revealing than the conveyor belt of politicians trotting out well-established viewpoints while things fall apart around them. The Morning Ireland team, meanwhile, sound energised by the chaotic events. The resulting programme gives a sense of history being made, albeit of the undesirable variety.

Given his long career as a newsman, it’s no surprise that Sean O’Rourke is similarly excited at the prospect of getting stuck into the Brexit action. Introducing Wednesday’s show (Today with Sean O’Rourke, RTÉ Radio 1, weekdays), the presenter reads out such an outlandishly lengthy roll-call of guests that one expects the phrase “Uncle Tom Cobley and all”.

But despite contributions from heavy hitters such as Bertie Ahern, David McWilliams and Michel Portillo, the programme doesn’t really add anything to our understanding of events, much less where it all leads. To be fair, trying to predict what happens next in Brexit is like trying to commentate on quicksand. For all the expertise of O’Rourke’s guests, so volatile and capricious is the current situation that their commentary calls to mind the late William Goldman’s famous line about the film business: “Nobody knows anything.”

That said, there are some lively moments, such as journalist Dearbhail McDonald’s robust exchange with DUP MEP Diane Dodds about her party leader Arlene Foster’s assertion that there was never a hard border in Ireland. Still, even O’Rourke sounds ready to move on after an hour of Brexit discussions, particularly when the next topic up is on “the state of Gaelic football”, a royal flush for the GAA-mad presenter.

O’Rourke hosts a more memorable encounter on Tuesday, when he talks to Master of the High Court Edmund Honohan, in the news for breaking three small window panes in his courtroom. It’s a minor story really, though O’Rourke is alive to the wider issues: “I’ve had to work in some stuffy studios, but I think if I broke a window I’d be shown the door.” Honohan counters that he has a “statutory obligation” to ensure fair hearings in his court, something that’s difficult in the “dank atmosphere” of his courtroom, caused by poor ventilation and sealed windows. Accordingly, Honohan took a hammer to the panes to facilitate “the extraction of stale airs”, leaving a message that the windows not be reglazed. “But of course that was ignored,” he adds ruefully.

The conversation is littered with exquisitely deadpan instances. Asked by O’Rourke if he had previously informed the OPW about the poor state of his courtroom, Honohan sounds mildly irritated: “I’m not a bureaucrat, I don’t deal with bureaucrats.” When O’Rourke suggests Honohan is “a law unto yourself in this matter”, the reply is succinct. “I am,” he says, again citing his statutory obligation.

As O’Rourke deftly draws out his guest, the impression forms of an intelligent, wry but slightly dotty individual. But when the presenter asks, almost as an afterthought, about the Bill Honohan drafted to offer more protection for mortgage holders in arrears, his formidable legal mind is obvious. He says “hundreds if not thousands” of repossession orders remain unexecuted, and thus have lapsed. “All should be cancelled,” he says. Whatever about the stuffiness of his courtroom, Honohan is alive to the problems of the real world – such clarity and candour is a breath of fresh air.

“You’ve taught me that it’s not the farts of cows that cause the problem, it’s the belches,” says Kenny

Compared to the Brexit overload of O’Rourke’s programme, The Pat Kenny Show (Newstalk, weekdays) takes a more minimalist approach when Jonathan Healy stands in as guest host on Wednesday. Healy interviews Tánaiste Simon Coveney, vigorously quizzing him about the possibility of border checkpoints. Somewhat randomly, he then asks for the Minister’s opinion on Taoiseach Leo Varadkar’s revelation that he’s eating less meat.

Rather than continue talking Brexit, Healy goes on to deal with this crucial latter issue, chatting to farming journalist Thomas Hubert on the environmental impact of Ireland’s livestock industry. Among other things, Hubert corrects Healy’s mistaken notions about bovine methane emissions. “If nothing else, you’ve taught me that it’s not the farts of cows that cause the problem, it’s the belches,” the host says.

It seems a trivial topic, but it touches a nerve. “We have an existential crisis for the future of our country and what do you all text in about? Whether you should have fewer meat meals,” says Healy, in mock consternation. Perhaps he shouldn’t be surprised. Like Brexit, a cow’s burp might be hot air or great gas, but it’s definitely heating up the atmosphere.

Amidst her celebrity interviews and lifestyle items, Marian Finucane (RTÉ Radio 1, Saturday and Sunday) can still be passionate. On Saturday, she mentions a book about the experiences of refugee girls, edited by Nobel laureate Malala Yousafzai. Finucane hones in on Yousafzai’s sense of displacement after moving to Birmingham. “We talk about asylum seekers and refugees,” Finucane continues, “but I don’t know if we ever adequately put ourselves in the shoes – if they have them – of those that are coming here, how utterly different their life is and how very stressful it might be.” She adds, rather hopefully, that “things are working very well” for refugees in Ireland, but her ultimate message is clear: “Let’s stick with Ireland of the welcomes if we can.” Indeed.

Book Ambassadors: What our envoys abroad are reading this summer
9