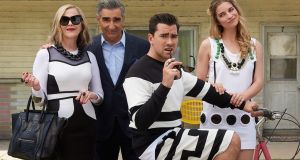 In February 2015, Chris Elliott made his final appearance on the Late Show with David Letterman. As Letterman’s funniest and best-known collaborator, Elliott took a moment to reflect on the differing paths they’d taken over the years. “Look here, you’re a television icon adored by billions,” he gushed to Letterman, to a surge of applause. Then, as the clapping stopped, his face soured. “And I’m on the Pop network with a show called Schitt’s Creek,” he spat. “So we’ve both achieved our dreams.”

Not a huge amount has changed in the years since. David Letterman is still an icon, albeit mainly now in the field of pogonology, while Schitt’s Creek remains a weird little curio that exists just beyond the reach of most peoples’ interest. This is a crying shame. It’s a crowded field to be sure, but Schitt’s Creek is almost definitely the best sitcom you haven’t quite got around to watching yet.

Actually, that might not be the case. Ever since it appeared on Netflix, Schitt’s Creek has been gradually growing a word of mouth fanbase, thanks to a steady trickle of converts who feel obliged to hand-sell it to their friends as soon as they’ve finished watching it. This is why a recent CBC article – Schitt’s Creek airs on CBC in its native Canada – called it “the little engine that could”.

Why are people so consistently falling for it? There are a number of reasons. First, as it enters its fifth season this week in the US, it has arguably the most impressive cast of any comedy on television. There’s Chris Elliott, of course; still as offbeat and unpredictable as he’s ever been. But there’s also Eugene Levy and Catherine O’Hara, the latter of whom delivers such a masterclass of oblivious comedy that she has single-handedly created an unscalable mountain of reaction gifs.

Then there’s the gradual blossoming of the characters. Since it began, Schitt’s Creek has told a very deliberately paced story. Episode one began with a family of newly-broke millionaires arriving at their one remaining asset; a backwater town they bought for their son as a joke. And, as such, it was a largely predictable comedy of contrasts. The family looked down their noses at the residents, who in turn sneered at the family’s lack of real-world knowledge.

It was great. Levy, O’Hara and Elliott are all perfectly capable of taking a premise as admittedly hacky as this and elevating it to sustain a couple of seasons of monstrous caricature work. However, the magic of Schitt’s Creek is that it has been unafraid to let everyone develop in a vaguely naturalistic way.

So, what’s happened over the years is that everyone has slowly become more accepting of each other. And then, last year, something clicked. As one, the characters all seemed to embrace their better instincts. Eugene Levy’s patriarch became more commanding and more empathetic. Annie Murphy’s daughter settled on a career path that worked to all her intolerable strengths. And then there’s David.

David, played by showrunner Daniel Levy, is the heart of the show. At first presented as a ridiculous pansexual clotheshorse, in season four he excelled by making himself vulnerable and entering into a relationship for apparently the first time in his life. Episode by episode we’ve watched him edge closer to his business partner Patrick, then drop away brokenhearted, then edge back again. You don’t expect a show called Schitt’s Creek to gun for such full-throated sincerity, but that’s what it has done. There’s an episode where David serenades Patrick by lip-synching to a Tina Turner song, and I’ll be damned if it isn’t one of the moving things I’ve ever seen.

That’s what Schitt’s Creek is now. It’s warm and inclusive and tolerant, and up there with something like The Good Place when it comes to making comedy from the art of self-improvement. It’s a tight bearhug of a series. If you haven’t watched it yet, you should. – Guardian

Schitt’s Creek is available on Netflix