TV review: RTÉ made a song and dance about the show’s makeover and ‘super high tech’ studio 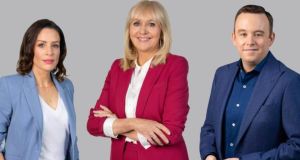 What would a Bond villain lair crossed with a Covid-themed gameshow look like? Finally the question is answered as Prime Time (RTÉ One, 9.35pm) rolls out its much-hyped revamp.

RTÉ’s venerable current affairs series is seeking to build on the momentum of the past 12 months (with nothing else to do we’re all at home bingeing on bad news). To that end, tonight it’s unveiling two new presenters in Sarah McInerney and Fran McNulty.

Alas, the new recruits are overshadowed by an overhauled studio backdrop. It’s erm, quite a sight, in so far as it is seemingly inspired by the final 20 minutes of Doctor No, an MC Escher doodle and that bit in Christopher Nolan’s Inception when all the buildings start folding in on another.

And that’s just what’s going on over the shoulders of the presenters. The studio itself is a riot of colour saturation. It couldn’t be any gaudier were Miriam O’Callaghan to make her entrance by jetpack, dressed as a Teletubby, wearing giant novelty sunglasses.

Some of the design choices are … daring. Consider, for instance, the yellow and black template that echoes the Department of Heath’s Covid branding, only with bonus tackiness. I had flashbacks to Bob Holness presenting Blockbusters. I kept expecting Minister For Health Stephen Donnelly to ask Sarah McInerney for a “P, please” and to then receive a T-shirt and dictionary as consolation prize.

Should aesthetics matter? Perhaps not.

Still, RTÉ has made a song and dance about Prime Time’s big makeover, which takes advantage of a “super high tech” new studio 5, upgraded with proceeds from the sale of land at Montrose. They’ve been hoisted by the leotards I kept thinking I could see in the background but which were merely an optical illusion triggered by all that day-glo.

But let us set to one side all that bling in yellow. Of the two additions to the team, the greater weight of expectation is on McInerney, who has won something of a cult audience since taking over as Drivetime presenter. On Prime Time her first big interview is, as pointed out, with Minister for Health Stephen Donnelly on the contentious issue of mandatory hotel quarantining.

She is impressive, avoiding the pitfall Irish broadcasters sometimes fall into of mimicking Jeremy Paxman and confusing rudeness for authoritativeness.

McInerney is unyielding in her questioning but never uncivil. She will clearly make a solid addition to the Prime Time team. McNulty, for his part, is confined to a report about the use of illegal livestock antibiotics north of the border.

This is preceded by a short exchange with Miriam O’Callaghan in which she invites him to explain why it’s important. And why we should keep watching.

Prime Time has had a decent pandemic, becoming a nightly appointment for many Irish people seeking to make sense of confusing times.

But if McInerney and McNulty are off to a respectable start, the revamped look will surely do Prime Time few favours. That new set is crying out for an emergency re-think – and a close encounter with a wrecking ball.