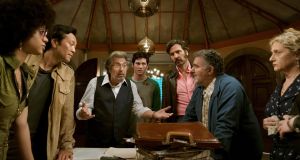 The overheated concept is that Nazis live amongst us (or at least among the population of Carter-era America). Their aim is to infiltrate society and unleash a terrible horror upon humanity. No, not space-hoppers or Spandau Ballet. They mean to establish the Fourth Reich in the land of the free.

Hunters is co-produced by Jordan Peele and shares the feverish sensibility of his horror-as-social commentary movies US and Get Out. It is far, far sillier though. The story opens with an All-American dad (Dylan Baker) whipping out a pistol and silencer from under his barbecue and shooting dead all of the guests at an after-work soirée, followed by his family.

He does so when a party-goer recognises him as a sadistic guard from a Nazi death camp. Better to stage a mass killing than to have his cover blown. But there’s little time to dwell on such absurdity as we are introduced to audience surrogate Jonah (Logan Lerman). He’s a typical 1970s kid who likes to do typical 1970s things, such as going to Stars Wars with his pals.

His world is tipped head-over-heels, however, when an assassin kills his grandmother, a survivor of the Holocaust. Meanwhile in Florida, a German rocketry expert working on the Nasa space programme dies when Zyklon B gas is pumped into her shower. Is this a conspiracy we see before us?

Pacino shuffles in halfway through the 90 minute pilot – later episodes clock in at over an hour – as Meyer Offerman. The character is clearly inspired by real life Nazi hunters such as Simon Wiesenthal.

And, as you would expect and demand, the star gives us the Full Pacino. He preens, he mugs, he is utterly and rhapsodically Al Pacino. It works too: when he’s on screen the B-movie tattiness recedes and Hunters acquires a belated prestige TV gloss.

But he is a fleeting presence in the early episodes. Instead, Hunters often founders under a dead weight of recycled Quentin Tarantino-isms. This is most blatant in part two as Offerman’s team of Nazi killers is introduced, in freeze-frame and with stylised lettering. Inevitably it includes a machete-wielding nun who might once have been played by Uma Thurman.

Still, at the level of guilty pleasure Hunters roars along while doubling as a timely reminder that anti-Semitism, along with other things, hasn’t gone away you know. Yet that isn’t quite enough to paper over its flaws. Those who appreciate substance along with their spectacle will be underwhelmed.