‘Irish racists believe Ireland should be pure. They know what they are doing’

New to the Parish: Dagogo Hart arrived from Nigeria in 2010 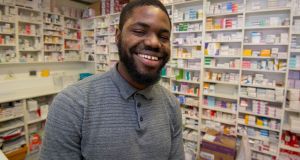 Dagogo Hart: “Not all people are ignorant, they understand who you are but they just don’t want you to be in their country.” Photograph: Dave Meehan for the Irish Times

Shortly after he arrived in Ireland, Dagogo Hart had to take a test to prove he could speak English. His initial amusement at the suggestion that a native English speaker needed to be tested to prove their language skills quickly turned to frustration.

Hart was 16 years old when he arrived in Ireland in October 2010 with a group of Nigerian students. A hard-working student, Hart grew up determined to study abroad. “It was when my dad passed that I started taking school a lot more seriously because I understood what my mum was going through. I was very young so the only way I could really contribute was to be good in school.”

After a year in Tralee, Hart and his fellow students were told the Nigerian scholarship programme could no longer afford to send them all to RCSI

Hart dreamed of studying at an Ivy League university in the United States and from a young age had his eye set on Harvard. His role model was Ben Carson, the neurosurgeon who went from an impoverished childhood to become director of paediatric neurosurgery at John Hopkins Hospital.

Hart knew his mother could never afford to send him abroad so he applied for numerous scholarships. When his uncle, a teacher, suggested he apply for a national scholarship to study in Europe he agreed without taking much notice of the details. “I don’t know why I didn’t take it seriously, I was studying for a different exam at the time. But then I got the scholarship. I didn’t even know where I was going, it all happened very quickly.”

Shortly before leaving Nigeria, Hart learned he was about to embark on a year-long medical preparation course before enrolling at the Royal College of Surgeons (RCSI) in Dublin. Only after arriving in Dublin Airport did he discover that he would spend his first year in a town called Tralee.

“There was a big group of us students and we had each other but walking or cycling to school you’d see everybody looking at you and asking, ‘Who are they?’. At the time, I didn’t see it as a bad thing, it made sense. If a random white person turned up in my street in Lagos, we’d wonder where did he come from?”

After a year in Tralee, Hart and his fellow students were told the Nigerian scholarship programme could no longer afford to send them all to RCSI and suggested they apply for courses in other universities. Still determined to make his medical career a reality, Hart applied to study pharmacy at University College Cork with a view of progressing on to a medical degree. He settled quickly in Cork but struggled financially when the scholarship payments stopped arriving.

“They would go two to three months without sending any money. We had to start relying on our parents and managing what little we had. It was tough but because we were a group we always shared what we had.”

After completing his degree, Hart moved to Dublin where he spent his internship year working in pharmacies in Crumlin and Clondalkin. “Dublin was very different to Cork, it’s a lot more multicultural. Of course, there are some parts of the city that are still very Irish but other places you can really see the influence of these different cultures – from restaurants, gigs and music.”

While in Cork, Hart began writing rap songs with some friends which over time progressed into an interest in spoken-word poetry. In Dublin, he found a venue that hosted a spoken-word collective where he tested out some of his writing. “I was so nervous right until I got up on stage because I didn’t know how other people would see it. But as soon as I started performing it felt so natural and I realised this is what I wanted to do.”

Hart now works full-time at the pharmacy in Clondalkin. “I’ve always been good at engaging on a human level so that part of my job is great, especially because old ladies are always open to chat. But obviously when you work with the public you might catch someone on a bad day. A pharmacist is in a position of power and I have to make decisions in terms of what medication people can get. People can get very nasty about that. I look at it as the nature of the job. Even if I wasn’t black, people would still have something to say.”

They were saying people should speak English and I found that funny because English is not the language of Ireland, it’s Irish

Racism is a problem in Ireland, says Hart, however, it can’t always be rationalised as coming from a place of ignorance. “Not all people are ignorant, they understand who you are but they just don’t want you to be in their country, it’s as simple as that. They believe Irish culture should be pure. When you see things like that photo of children in a classroom posted on Facebook you can’t really say that’s ignorance. These people know exactly what they’re doing.”

He reflects on one experience where he overheard two men on a bus discussing immigration in Ireland. “They were saying people should speak English and I found that funny because English is not the language of Ireland, it’s Irish. They said the next thing there won’t be any English left, Ireland will be full of foreign languages. But English is a foreign language here, did no one ever tell you that?”

Dagogo spends his free time writing and performing his spoken-word art. “Writing is easy, I do it in the mornings when I wake up and after work when I go home. The hard part is finding time for a gig or an event. It’s a lot to juggle I guess but I love poetry and also love working in a pharmacy. Maybe because I love both things I find time for them.”

He enjoys living in Dublin but misses Nigeria and has considered moving back in the future. “I’m highly affiliated with Nigerian culture, especially rap culture, and in the long-term if I don’t find that here, I definitely want to go back.

“It’s the same way if you’re Irish and you live abroad: you’re lucky if you’re surrounded by people with a similar culture – people with the same history and background as you, helping each other to thrive.”

Dagogo Hart will perform his spoken word this Friday, July 14th from 5.30pm as part of the Talkatives event at the Workman’s Club. Tickets via eventbrite.ie.