On this day, 1949: ants attack Vatican, troops on Yugoslav borders, babies born to refugees in Cork

October 20th 1949 was a busy day: IRA men were being released from prison, ‘Chinese Communists’ were getting ready to take ‘vital islands’ and house owners here wanted to contest the next election 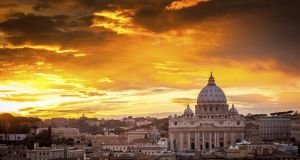 The Vatican was under invasion on Oct 20th 1949, by an army of white ants that were eating their way through walls and ceilings at the heart of the Papal Archives. “By the time the invasion was discovered the ants had eaten their way through several books and documents, reduced the Cardinal’s ceremonial cape to a fragment of grey powder, and eaten away an oak beam to the point were it was about to collapse on the Cardinal’s bed.”

Meanwhile, on the Yugoslav border, Hungary was massing troops. Joined in their efforts by Rumanians, Bulgarians and Albanians, they were reported to be “digging trenches , building pill-boxes and wire entanglements.” The article also gives details of alleged Soviet troop movements in “frontier areas of Hungary and Rumania”.

Back home, a baby girl was born to an Estonian refugee in a Cork nursing home, the third child born since the Victory reached Cork.

In Dublin, the Irish Houseowners’ Federation were seeking to put forward a candidate for the Dail at the next general election who would “watch over the interests of house owners . . . the federation did not seek excessive rents but they wanted justice. There were tenenats who could afford to pay higher rents – some of them were earning higher incomes than the landlords.”

In the North, five young members of the IRA “who were sentenced to death for the fatal shooting of Police Constable Patrick Murphy on easter Sunday, 1942, and later repreived,” were released from Belfast prison.

The front page of The Irish Times on Oct 20th 1949 was heavy on short news and had yet to adopt the idea that a cracking front page photograph helped sell newspapers. There were 25 short news stories onthe front page covering everything from business to international affairs to local politics with a small photograph of a new French glider plane.

There were six ads: one proclaiming Esso as being the most famous name in the world and another for the EBS who underlined the importance of a solid man, a solid security and a solid society. Smaller ads around the masthead offered the latest accordians, Murphy radios, Irish Mist whiskey Liqueur and Maduro, a “very special Sherry from the house of Morgan”. The edition had eight pages and cost 2d.