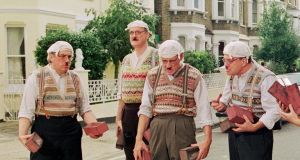 They return – it would appear – to a time where no one is the messiah but there is no shortage of naughty boys.

Fifty years after the first broadcast of Monty Python’s Flying Circus, the men who revolutionised comedy have revealed details of events to mark their anniversary in what they dubbed “an increasingly Pythonesque world”.

“Extreme silliness seems more relevant now than it ever was,” the surviving five Pythons added in a statement that also revealed plans by BBC Radio 4 to air new radio specials.

The troupe’s legions of fans of all generations can also look forward to what has been billed as the “first official Monty Python Guinness world record attempt”, which will take place on the anniversary date itself, October 5th.

The record that they will attempt to break is the “largest gathering of people gressed as Gumbys”. A Gumby is a recurring character from Python sketches who has a small moustache, wears a handkerchief on his head, and spectacles, braces, a knitted tank top and wellington boots.

Michael Palin will be executive producer of the series of new radio programmes, but it has not been confirmed how many of the other Pythons will take part.

Graham Chapman died in 1989, while Terry Jones was diagnosed in 2015 as having frontotemporal dementia. However, the other members, Eric Idle, John Cleese and Terry Gilliam, are likely to be involved in some way.

There are also question marks over how the Pythons and their brand of humour will be received by members of the public in 2019, including those angered by Cleese’s recent comments on Twitter that London was no longer “an English city”.

A statement issued on behalf of the group said that a “BBC takeover” in September would feature previously unreleased material from the Monty Python sound archives.

Listeners are being invited to find out the extra unpleasant things that were planned for Idle’s Brave Sir Robin character, a cowardly knight whose minstrels sing about the terrible fates that await him in the film Monty Python and the Holy Grail. A return is also on the cards for other characters, namely the Fat Ignorant Bastards, who “have never been more relevant to the world today”, according to the group.

On television, BBC Two will celebrate Monty Python with “defining career pieces” from the archives.

The anniversary celebrations begin on September 1st at the BFI Southbank, London, which will curate a month-long season celebrating the Pythons’ influences and subsequent work both as a group and as individuals.

Entitled It’s . . . Monty Python At 50, the season will feature all the Monty Python feature films, oddities and curios from the BFI national archive, back-to-back screenings of the entire series of Monty Python’s Flying Circus as well as screenings of post-Python television created by group members, including Fawlty Towers and films such as A Fish Called Wanda and Time Bandits.

The season also includes screenings of pre-Python shows At Last the 1948 Show and Do Not Adjust Your Set.

Other initiatives include the release of 50th anniversary editions of a number of official Monty Python books. The Big Red Book and Brand New Papperbok, both published by Methuen, are to be reissued and on sale from October 4th.

There is also something that might please the Pythons’ Four Yorkshiremen as they compete with each other over the extent of their childhood deprivation. Black Sheep Brewery will be releasing a special 50th anniversary edition of Monty Python’s Flying Circus cask ale, A Very Silly IPA (4.5% ABV), which will be available from September to October.

Those interested in taking part in the record Gumby gathering at a yet to be announced London venue have been asked to join the official Facebook group for the event. – Guardian

The movie quiz: Charlize, Arnie, Kurt, Helen – who hasn’t been in a Fast & Furious film?
6