Michael Palin and Terry Gilliam: ‘We didn’t ad-lib because Cleese doesn’t like it’ 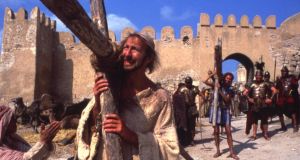 Actor, writer
We were on a publicity tour in Amsterdam for Monty Python and the Holy Grail when Eric Idle came up with the title Jesus Christ: Lust for Glory. We all laughed: “We could never do that!” But we liked the challenge of doing a film about religion. Then someone suggested it be set around the time when Jesus was alive, but it’s a case of mistaken identity. Someone who’s thought to be the Messiah, but spends the whole film protesting that he isn’t.

Generally speaking, the Pythons wrote in separate groups who came together later. We ended up in Barbados for two weeks and got a lot of the script done there – the linking up of the various sketches. It gave the script a great clarity that Holy Grail and The Meaning of Life don’t have.

EMI was going to finance the film but got cold feet. It was a mortal blow, because we were already in preproduction. So Eric went to Hollywood and pitched it to George Harrison, who had been a huge Python fan since the first TV programme. He pawned his house and arranged a loan of $5 million. When he was asked why, he just said: “Because I want to see it.” Not many people pay $5 million for an admission ticket.

The most difficult thing to shoot was the Pontius Pilate scene. All the centurions had to be on the verge of cracking up, while Graham and I had to remain totally straight-faced

John Cleese had wanted to play Brian. Graham Chapman had been drinking quite a lot, and John thought we needed a safe pair of hands for the lead role. But Graham gave up drinking just before and was dry throughout. He had a kind of decency that anchored the whole film. He was also a qualified doctor, so he was very useful looking after cast and crew while we were shooting in Tunisia, with all the stomach upsets people had.

The most difficult thing to shoot was the Pontius Pilate scene because it had to be structured around continuous suppressed laughter. All the centurions had to be on the verge of cracking up, while Graham and I had to remain totally straight-faced. It was really hard work. On the various takes, I used to have to think of a silly word to whisper into someone’s ear. It worked very well, but there’s one take where I’m nose to nose with Chris Langham and we both crack up, and I’m not fully turned away from the camera.

It was banned in Ireland, Norway and Italy; 39 British councils either banned it or gave it an X certificate. John and I decided to appear on the BBC chatshow Friday Night, Saturday Morning to defend the film against the bishop of Southwark and Malcolm Muggeridge. We wanted to explain why it wasn’t a film denigrating Jesus in any shape or form. So to get there and find that they were the ones who were behaving like little children, playing to the crowd and saying, “You’re going to get your 30 pieces of silver,” was unbelievably irritating. That interview was a huge turning point: it helped break the assumption that religion was something the establishment told people how to talk about. They’d embarrassed themselves by making a pathetic case.

Actor, writer, production designer
I’d directed Holy Grail with Terry Jones, but I didn’t have a problem with him doing Life of Brian on his own. Directing Python was hard work, because people didn’t like to be uncomfortable: they didn’t like to wear beards or uncomfortable costumes. Those, to me, were important elements, and I didn’t want to have to fight for that stuff.

I just wanted to concentrate on the look of it. It was very important to keep it feeling real and dirty and decayed. By making everything so grimy and unpleasant, it made the humour funnier. We did most of the shooting in Sousse, in Tunisia, and the ribat [or fort] in Monastir; it looked fantastic, but we added various things like the ramp and the portico where Pilate and Biggus Dickus try to “welease Wodewick”.

Terry and I agree on so much, but then we disagreed on almost as many things. We built this extraordinary set for Pilate’s atrium, but you don’t see it because of the way Terry shot it. He shot it to highlight the character comedy, which is the right way. I loved playing the jailer. It was another case of I’ll do a grotesque character – skull split open, wearing awful stuff – because the others wouldn’t. That sequence with Mike and Eric was one of the few instances of ad-libbing; Python didn’t ad-lib because John didn’t like it – he’s a fundamentalist when it comes to humour, ironically.

The protests in New York were really vigorous. We managed to get the Catholics, the Protestants and the Jews all pissed off at us. The crucifixion scene did it every time. Christians seem to take crucifixion as theirs alone, never mind that it was done to a lot of non-Christians. My own mother, who was a real churchgoer, couldn’t see what people were getting angry about, because it was about somebody else called Brian. It wasn’t blasphemy.

I was very proud we achieved that much of a reaction. They were the people we were after: those who blindly follow religious diktats and don’t think for themselves.

We made it 40 years ago, but it is so applicable to our world now. Which either says the world never really changes, or it just gets more absurd. There’s fundamentalism, there’s anti-Semitism – we deal with that when Brian finds out his father’s a centurion – and then there’s Stan who wants to be a woman. Our headlines are about this stuff every day. The only difference now is people have lost a lot of their sense of humour that they had back when we made the film. – Guardian

Monty Python’s Life of Brian 40th-anniversary rerelease opens on limited release today, with screenings this evening and over the weekend at the Irish Film Institute and Light House Cinema, in Dublin, among other venues