I’ll Get This: Waiter! The celebs at the next table are having way too much fun 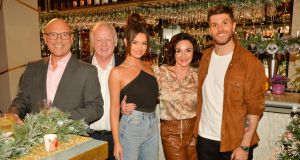 “Mistletoe!” shrieks Shirley Ballas, the Strictly Come Dancing judge, choking slightly on her own laughter but persisting in the game with no strict adherence to a tune. “Mistletoe!”

Waiter! The celebrities at the next table are making a scene!

I’ll Get This (BBC Two, Thursday, 10pm), a cross between dinner and Russian roulette, commands a group of celebrities to share a restaurant meal, order liberally, play a bunch of games, and let the loser pay the bill. For its Christmas special this table has attracted Ballas; Gregg Wallace, from Masterchef; Les Dennis, from your fading memories of youth; Joel Dommett, from your inability to keep up with comedy panel shows; and Maura Higgins, born in Ireland, created on Instagram and made for Love Island.

‘This is the most embarrassed I’ve ever been on television in my entire life,’ says Joel Dommett, finally stuck with the cheque, ‘and I’ve had a sex tape’

If you know Higgins you’ll remember her acidulous put-downs of presumptive males, which is why it’s disappointing that Dommett’s virtue-questioning early “ho ho ho” joke goes without thermonuclear comeback.

Higgins, however, is unashamed to admit when she doesn’t know something: a pre-Vernon Kay version of Family Fortunes, for instance, or when the VHS format was discontinued, or whether there is a difference between panto and musicals, or the title of her favourite Christmas song (Fairytale of New York) or even (as some sailor-grade hard swearing attests) the nature of the show she is now on. This doesn’t stand in the way of her winning, though, which gives you a sense of both the scale of the challenge and the scope of the wine bill.

“This is the most embarrassed I’ve ever been on television in my entire life,” says Dommett, finally stuck with the cheque, “and I’ve had a sex tape.” The bill, pumped up with £190 bottles of Krug, comes to £752. Given how things might have turned out, it seems like a small price to pay.

Finding the Way Back: A career-best performance from Ben Affleck
9