If Downton Abbey is going to end on a high, the revolution will need to be bloody 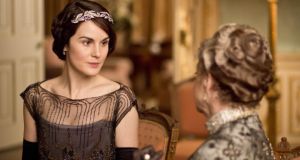 I’ve been watching season six of Julian Fellowes’ Downton Abbey (Wednesday, TV3) and time is zipping by as is Fellowes’ wont. It is now the distant future, the year 2000, and Starlord Grantham of Downton Sector is being chauffeured in his flying car by Robobutler Carsonotron. The Dowager Countess, now a giant space worm, makes a quip about breeding to Daze-E the housebot. There’s still no revolution.

Downton Abbey never ends. And, as people in the future say, for f**k’s sake.

Despite many deferential nods to the passage of time, very little has changed in Downton. It’s still popular, though I suspect that if programmers replaced it with hours of footage of a smiling footman polishing silverware while a posh voice whispered “frocks” it would still be popular.

Jolly winner of the genetic lottery Lord Grantham still can’t dress himself and bounces around the house like it’s a ginormous ball-pit. Daisy the housemaid is still on a course of self-improvement but is kept away from books on Marxist theory. And wacky neighbour, the Dowager Countess continues to audition for a spin-off sitcom titled Well I Never! and is now followed by a small studio audience and a Seinfeldian bassist. All of her hilarious witticisms are, of course, sponsored by the crushing might of the British class system – this week: “A peer in favour of reform is like a turkey in favour of Christmas.”

Bates the valet has successfully impregnated Anna the lady’s maid, thus ensuring a new generation of drones to service the ruling class. Trusted retainers Mr Carson and Mrs Hughes (their first names) are getting married and Lady Mary and Lord Grantham and Lady Cora are acting like those people on Facebook who hold weddings for their cats, dressing them up and imagining what they’d be saying if they could speak.

Lady Mary v John Rambo
Lady Mary hasn’t ridden anyone to death in ages, but you can see the mark of her experiences on her consistently surprised face. Nowadays she wears a headband, which my wife insists is normal for a 1920s flapper, and she only dimly recalls when she terrorised a small town after being harassed by a local police chief. (Sorry, the only other person I know who wears a headband is John Rambo and I may be getting some plots mixed up.)

Uncle Tom Branson, aka parallel universe Michael Collins, an Irish republican turned Dowtonian toff, returns from Boston where all the “Kiss me I’m Irish” T-Shirts made him homesick for class betrayal. He waxes lyrical about how lovely being part of the British ascendancy is. Then he burns an Irish flag, criticises the recent U2 album and reveals that when he was a chauffeur, his car was powered by rapidly spinning 1916 martyrs.

Lady Edith is now a bluestocking who runs her own magazine – Posh Meddler or Nuts or something (“Top tips on marrying your cousin!” “9 ways to euthanise your maid!” “Phoar, feast your eyes on these fine fillies!”). She is assisted by a new love-interest called Bertie, whom she tells about her butler’s forthcoming wedding. Carson, she informs him, has been with the family since he first arrived in their garden as a stray.

“I love those stories,” says Bertie wistfully. “I wonder how much longer people will tell them.”

“I know. But let’s not be sad,” says Edith. And I too stifle a sob, thinking about how heartbreaking the end of feudalism is.

There’s also a bit where Thomas the nefarious footman nefariously walks to an old, rambling mansion. There he meets a raddled old toff, heating his underwear on the fire and sadly recalling the old days. “Oh, you should have seen it,” he says with a faraway glint in his eye. “We had such fun in those days . . . The women going up to bed in the evening. Their diamonds twinkling as they climbed up into the darkness.”

This is, of course, the real Julian Fellowes and this was originally meant to be the director’s commentary.

Like the aimless ramblings of a nostalgic posho, the plots of Downton recycle themselves, the characters are frozen and history, despite utterances to the contrary, has stalled. Downton is in a rut. Personally, I feel every scene could be improved with the addition of a few conclusive grace notes.

Like: “Then Anna stabs Lady Mary repeatedly with a hat pin and starts to sing the Internationale.”

The only logical outcome
A bloody revolution is the logical outcome to such historical stasis, and presumably that’s what we’re building to in the Christmas special. What’s that you say? A cathartic massacre of the Grantham family followed by a dictatorship of the proletariat and a bit of a purge is not what most people seek from their escapist period dramas? Ah, come on. Who doesn’t want the final scene to be this:

“Enter Daisy, reading a book, holding a shotgun and using Lord Grantham’s head as a hat. ‘Good lord, child, what are you wearing?’ says the Dowager Countess. She looks directly at the camera and winks. Camera fades to black to the sound of polite screaming.”


Also set in the North of England, and conceivably featuring the working-class grandchildren of the Downton servants, is another period drama, This is England 90 (Sunday, Channel 4). Shane Meadows’s television sequels to his film of the same name, include some of the most unusually paced, emotionally charged drama on television.

Driven by the deeply-felt improvisation of its young actors, it veers unpredictably from character comedy to kitchen-sink melodrama and is like nothing else on television: an unpredictable, incredibly moving exploration of friendship, family, trauma and love. Compared to Downton Abbey, it feels revolutionary.

Pelé: A rounded portrait of the world’s greatest footballer