Which will be worth watching to the final moment and which will stumble at the end? 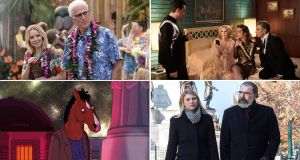 Between the raging Australian wildfires and the precipice of the third World War, 2020 didn’t exactly get off to a great start. And it probably isn’t going to get much better, as the year will also mark the end of a number of your favourite television shows. Here’s a round-up of the key series preparing to come to an end.

True, The Good Place isn’t the show that it once was. What began as a truly delightful, optimistic exploration of ethics has gown saggy and directionless, in part thanks to that unnecessarily long stretch where we were subjected to The Worst Australian Accents Ever Heard By Human Ears. Nevertheless, with just four episodes left, it’s still sad to say goodbye to Team Cockroach. If we get to the end of the year without anyone greenlighting a Joey-style spin-off for Janet, I will personally be very upset indeed.

I’ll be honest here. I, like you, didn’t realise that Homeland was still on. Once the Brody storyline came to its own absurdly silly conclusion, Homeland devolved into something much more flat and uninteresting. Did you know that this will be the eighth season of Homeland? Can you remember a single thing about the seventh, sixth or fifth seasons? Me neither. But hopefully it can rally this year and end big. Carrie Mathison has been though a comically huge amount this last decade. If this last run can tie up her story with enough grace, this could be worth watching.

Now this one is sad. The first episode of Schitt’s Creek only appeared in 2015, but in that time it has shaken off its rusty sitcom premise to become something truly special. It’s a warm, wonderful, inclusive show that has a tendency to make every viewer feel like the first person to ever discover it. There will be so much to miss when Schitt’s Creek leaves us – not least Catherine O’Hara’s breathtakingly weird performance as Moira – and there are sure to be tears along the way.

Like Schitt’s Creek, BoJack is another series that managed to slip its potentially horrible premise – a horse is a Hollywood hasbeen – and become something nuanced and beautiful. BoJack has been sad as much as it has been funny, with every repercussion to every horrible decision tending to play out in full before us. This final season has been split in two. The first half ended on an incredibly ominous note, as BoJack’s quest for redemption butted hard against the damage that his behaviour has caused. Honestly, these last episode could go either way. We might see a happy Hollywood ending, or something unbelievably dark could be in store.

It only seems like yesterday that we were being introduced to the Gorgeous Ladies of Wrestling, and yet now it’s coming to an end. One of the best – if not the best – Netflix Original series, Glow had so much going for it. It hit the peaks of 1980s nostalgia with more accuracy and panache than its stablemate Stranger Things. It was able to surf genres, skipping from comedy to drama to flat-out parody, with an ease that remains untouchable. In Betty Gilpin it uncovered one of the best actors of the modern age. There’s no word about how the show plans to wrap up, but nevertheless this will be a hard one to leave.

Now that even the youngest cast members are well into their mid-forties, it is finally time to say goodbye to the Pritchetts and the Dunphys. Modern Family has become a bit of a dinosaur of late. The child actors are now adults. The adult actors are now sleepwalking. The product placement episodes are glaring enough to be nauseating. And yet on its way out, perhaps the show can recapture some of the frenetic warmth that made us love it all those years ago. Here’s hoping.

Fresh Off the Boat

Everyone knew this was coming. As soon as Constance Wu used her social media presence to complain about its recommission last year, Fresh Off the Boat’s days were numbered. The bad news is that it’s a real shame; Fresh Off the Boat wasn’t just an important sitcom in terms of authentic diversity, but it was also capable of being very funny. The good news is that we still get a whole season of watching Wu do her best to hide the fact that she really doesn’t want to be there. – Guardian