His Dark Materials review: A terrific Lyra, an invigorating fantasy

It’s a lavish adaptation from BBC/HBO, but – happily – Philip Pullman’s darkness is here too 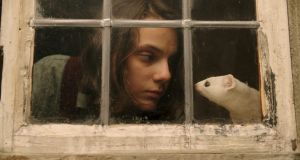 There’s something immediately familiar about Lyra Belacqua, the young hero of Philip Pullman’s trilogy of novels, His Dark Materials (BBC One, Sunday, 8pm). Another orphan, fated to change the world, and first sequestered in a hallowed place of learning, she predates both Harry Potter and Game of Thrones by a full year or two, while following in a long line of Skywalkers, Hobbits or, if you like, Christs.

One difference to those peers, though, is that while Lyra’s beloved story already found a magnificent stage adaptation, it has fared less well on the screen. Maybe her mystical quest, assisted by spirit animals, through a vintage world choked by religious control, leant better to the nuances of literature and theatre than a medium overrun with CGI and studio notes.

In the years since a bungled 2007 movie version, television has become a more accommodating place for both drama and magic; as supportive to creative control as it is sophisticated in spectacle. To watch the 12-year-old Lyra (a terrific Dafne Keen) running across the stonework and steeples of Jordan College, in Oxford, with her chatty daemon Pantalaimon (an animal manifestation of her soul), is to slip happily into an invigorating fantasy without any snag of distraction.

Like Lyra – headstrong, rebellious, yet generally adored – this co-production between the BBC and HBO seems to recognise in His Dark Materials a debt of care, aware of both the phenomenon’s potency and its vulnerability.

Pullman famously makes an enemy out of religion (represented here as the draconian Magisterium), and his atheistic concerns make Lyra’s journey satisfyingly freighted. Her aloof, long-absent uncle Asriel (a dashing James McEvoy, with the grizzled quiff of an arctic explorer) is one part Galileo, to two parts Indiana Jones, returning to the college in pursuit of funding for further heretical discoveries.

Enlisting Lyra straightway into espionage, Asriel gives an uncommonly stark caution: “If you make a noise I will not save you. You’re on your own. Do you understand?” That sure sounds like atheism to me.

It is also what makes the show such an involving pleasure; because Lyra, with only a soul for company, has to figure out the world as she goes along. Thrust into the care of Rachel Wilson’s intoxicating adventurer Mrs Coulter, and aided by an ornate clockwork device that “tells you the truth” (as Clarke Peters’ dubious college Master explains, alas, without supplying instructions), Lyra has to learn whom she can trust.

As with the novels – implicitly aimed at young adults but hardly restrictive – the show’s appeal is broad because its adapter Jack Thorne understands that everybody goes on something like that journey. Director Tom Hooper corresponds with lavishly filmed, meticulously designed scenes, over a zippy momentum, and frequently the low camera angles of a child’s view.

Through Keen’s soulful eyes, you look up at soaring Zeppelin ships, marvellous buildings or inscrutable adult faces with curiosity, suspicion and wonder.

This world “is both like and unlike your own”, we are told at the outset, but to be honest the separation between them has always seemed thin. It’s an age-old story about the passage from innocence to knowledge, with all the thrill and terror that entails.

This is a bright rendering of Pullman’s material, then, but its darkness, happily, has not been dispelled.