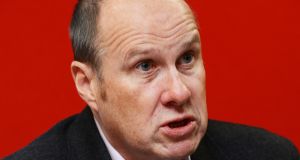 Ivan Yates: ‘It’s a national sport in Ireland to be a begrudger.’ Photograph: Cyril Byrne

No-one could accuse Ivan Yates of being shy and retiring. The presenter of The Hard Shoulder (Newstalk, weekdays) has never been short of self-confidence, whether holding forth with opinions or harrying guests with difficult questions and easy slags. Even so, it’s a shock to hear Yates branded a narcissist, as happens on Tuesday’s show.

In fairness, psychiatrist Professor Brendan Kelly isn’t having a pop specifically at Yates when he makes his claim, rather he includes his host in a sweeping diagnosis: “I would say everyone is a narcissist,” Kelly says.

This somewhat alarming statement comes during a discussion on a recent study that found people with mild narcissism are less prone to stress and depression. Typically, however, the presenter is less interested in clinical matters than getting a rise out of his guest.

When Kelly defines narcissism as “excessive self-admiration”, Yates muses whether “in some cases, it’s more justified”. When Kelly says that such people deem themselves and their opinions more important than others, Yates replies, “Well, that could be factual”. It’s larky in a deadpan way, reflecting Yates’s sceptical irreverence for anything vaguely pointy-headed, though there’s possibly some inadvertent self-diagnosis thrown in too.

But when Kelly suggests a little narcissism helps in coping with life’s brickbats, Yates lets out a cri de coeur: “It’s a national sport in Ireland to be a begrudger,” he says. It sounds like Yates needs to feel the love.

Neither Yates nor indeed his listeners would want to have a thin skin, given some of the items on his show. Following death threats against directors of Quinn Industrial Holdings (QIH), whose chief operation officer Kevin Lunney was kidnapped and tortured in September, reporter Barry Whyte visits the Cavan-Fermanagh border to take the temperature. The report is disturbing, not for what is said, but for what isn’t.

Whyte remarks that locals “don’t want to speak”, whether out of fear or loyalty to QIH’s deposed founder Sean Quinn, who created so many jobs in the area. One man who Whyte persuades to talk remarks that hardly anyone discusses the campaign against QIH executives in public, prompting Yates to talk of an “omerta culture”. Despite the presenter’s obvious revulsion at what is happening, he doesn’t say much more. He doesn’t need to.

Yates also takes a back seat for the most joltingly memorable item of week. On Tuesday, following a sentencing hearing for two teenage boys convicted of the murder of 14-year-old Ana Kriégel, an actor reads out the victim impact statement given in court by Ana’s mother, Geraldine. The actor, unnamed by Yates, delivers the lines in a monotone, which only emphasises the unimaginable horror and grief.

Hearing the testimony aired in full packs a particularly visceral punch, compelling the listener to share, however faintly, the Kriégels’ “unbearable” ordeal. It’s as stark a piece of radio as you’ll hear all year. Yates, for his part, deserves credit for giving over the time for such a piece. He’s confident enough to know when to stay silent.

There’s more discussion of violent bereavement on The Ray D’Arcy Show (RTÉ Radio 1, weekdays), when the host speaks to Figen Murray, whose son Martyn Hett was one of 22 people murdered in the 2017 Manchester Arena suicide bombing at an Ariana Grande concert. Despite this grim backdrop, however, her conversation with D’Arcy has an unexpected air of affirmation, spiked with some haunting moments.

The latter come when she recalls the night of Martyn’s death. She was unaware he was even attending the concert, but after he failed to return her calls, she knew he was dead. “It was just the weirdest sensation, because I had such a close bond with him,” she says.

Even more discomfiting is the clip of D’Arcy actually interviewing Martyn in 2015 about his tattoo of Coronation Street star Anne Kirkbride, which the host had spotted on social media. Hearing Martyn cheerfully chat in his strong Manchester accent is a reminder how he was a real person rather than an anonymous victim.

His mother makes the same point in a different way, taking comfort from the fact that he was happily drinking and dancing at the instant his life was taken away. She even forgives her son’s killer. Even as she mourns him, his mother’s refusal to define Martyn’s life by his death imbues the interview with a poignant yet oddly positive air. D’Arcy’s show is still cluttered by rote celebrity interviews and lifestyle advice slots, but such moments can make it all seem worthwhile.

Emotionally-charged memories also feature when Fr Brian D’Arcy appears on the Pat Kenny Show (Newstalk, weekdays) to talk about his new autobiography. Once lampooned as “Fr Brian Trendy” by the late Dermot Morgan, D’Arcy may be a throwback to the days when celebrity priests acted as television life coaches, but his story is if anything more resonant and relevant today.

A cleric who was always aware of the Catholic Church’s awkward relationship with modern Irish society, he decries the continued refusal to ordain women despite falling numbers in the priesthood. (Kenny, eager as ever to impart his knowledge, refers to historical cultural factors behind this ban, noting that “women in their menstrual cycle were regarded as unclean”.)

D’Arcy then gets personal, recalling the abuse he suffered as a child and later as a seminarian, and musing on the effects of this trauma. “Once you’ve been abused, it marks you for life,” he says, noting that this has grown worse as he grows older. “I’m now 74 and I still feel I was responsible for my own abuse.”

It’s a devastating revelation, particularly from a priest who seemed at ease with himself in his public image. Yet D’Arcy has rarely sounded more inspirational. Such honesty and vulnerability requires true self-confidence.

Radio Moment of the Week: Writer comes in from the cold

For sheer listening pleasure, Saturday’s conversation between Marian Finucane (RTÉ Radio 1, Saturday and Sunday) and novelist John le Carré is hard to beat. Speaking with intellectual and vocal clarity, the British author talks about his life as a Cold War spy and subsequent chronicler of espionage foibles.

But Le Carré is at his most urgent when talking about contemporary politics: he is “heartbroken” by Brexit, to the point that he has applied for an Irish passport. (His grandmother was Irish.) As for his homeland, le Carré despairs at what he sees: “There’s something very nasty growing up in the land of England.” But such sombre subject matter makes for an absorbing piece of radio.