El Camino: Watching the Breaking Bad movie? Here’s what to look out for 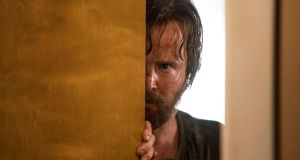 Six years ago Breaking Bad came to a bloody and satisfying end, and with it the story of Walter White, the high-school science teacher, played by Bryan Cranston, who became an Albuquerque drug kingpin. Netflix quickly showed a prequel series, Better Call Saul, giving fans more time with characters such as Saul Goodman, Mike Ehrmantraut and Gus Fring. But given that shift in focus – and all the carnage of the final Breaking Bad season – it was reasonable to think that the finale was the last word otherwise.

Then, in late 2018, the series’ creator, Vince Gilligan, secretly gathered his collaborators in New Mexico and directed his own screenplay for El Camino: A Breaking Bad Movie, which comes to Netflix today. Judging by the trailer, the movie introduces a bunch of new characters and brings back a few familiar ones, the most important being Jesse Pinkman (Aaron Paul), whom we last saw looking broken but alive, speeding off through the desert in – a Chevrolet El Camino.

But what about the rest? Remember Skinny Pete? And what about poor Flynn? It’s been a while, so here’s a refresher on where we left the characters who may still have some bearing on the sequel – alive, dead or somewhere in between.

In season five Walter’s right-hand man, Jesse, went through the wringer. First he came to realise just how much Walter had betrayed him. Then he was made a literal slave to meth-dealing white supremacists. We don’t know a lot about what happened to Jesse after the desert shoot-out that killed the DEA agent (and Walt’s brother-in-law) Hank Schrader, who was played by Dean Norris. But by the time Walter came to save him his existence looked tortured: imprisoned in the meth lab, cooking for monsters, rarely seeing the light of day.

Walter saved him, relying on his usual mix of brazenness and ingenuity (and the help of a remote-controlled machine gun). Jesse sped off into the night, hysterical and screaming. The movie looks to pick up immediately thereafter, so remember the trauma inflicted by Jesse’s captivity. It will surely play a role.

The first teaser trailer for El Camino offered a glimpse of Jesse Pinkman’s regular collaborator Skinny Pete (Charles Baker). He appears again in the official trailer, alongside his usual partner, Badger (Matthew Lee Jones). They were two of the last people to do business with Walt. In the series finale they were paid by Walter to pose as assassins outside of the home of Walter’s former business partners the Schwartzes (Jessica Hecht and Adam Godley), a ruse to ensure that the couple would do as they were told. Pete and Badger also revealed to Walter that blue meth was still on the scene. Jesse has turned to them in times of need before. Judging by the trailer, he looks to need their help again.

The last we saw Saul, Bob Odenkirk’s character, he was headed to a new life – which Better Call Saul has since confirmed involved an illustrious career as a Cinnabon employee. Could he resurface somewhere on the timeline between his last Breaking Bad appearance and those ominous Better Call Saul flash-forwards? Certainly. And an appearance by Odenkirk could really tie all three Breaking Bad-related projects together.

Saul’s lovable bodyguard, Huell (Lavell Crawford), has been the subject of much internet concern, as he was last seen being told never to leave a safe house by Agents Schrader and Gomez – who were then killed by Nazis. Is he still there? If Saul comes back into the picture in El Camino he could also bring back one of the few people he thinks he can still trust.

There’s a shot of a photo of Jesse’s former girlfriend, Andrea, and her son, Brock (Ian Posada and Emily Rios), in the El Camino trailer, reminding viewers how important they were to Jesse – and to the plot: the end of Breaking Bad would have been very different if not for Jesse’s realisation that Walter had poisoned Brock. In the second-to-last episode Jesse watched as Todd (Jesse Plemons) murdered Andrea on her porch; maybe Jesse will try to be a father to an orphaned Brock in El Camino. And although most of the Nazis are dead and Jesse already strangled Todd to death in the finale, it stands to reason that some of Todd’s more distant associates are probably still alive. Will Jesse be seeking more revenge?

The owner of Rocker Salvage (Larry Hankin) was a part of Jesse’s schemes in season five. He supplied the giant magnet used to wipe clean Gus Fring’s laptop in police custody. And he helped Jesse and Walt build their mobile-meth-lab operation. He has been spotted in the trailer for El Camino.

Skyler and Walter jnr, aka Flynn (Anna Gunn and RJ Mitte), again moved with baby Holly out of the family home in which so much of Breaking Bad took place. But Walter still found them in the finale. In a phone call the episode before, Walt jnr had angrily asked his father to hurry up and die, so it’s just as well he wasn’t home. Almost unfazed by Walter’s appearance, Skyler listened to what Walt snr had to say, arguably got some closure, learned where Hank’s body was buried and then allowed him to say a final goodbye to his daughter. After leaving, Walter watched from afar as his son returned home from school, unaware his father was seeing him for the final time.

Left to reassemble the pieces of Gus Fring’s broken empire, Lydia (Laura Fraser) was a key part of how the series reached its conclusion. Her expanded role was short-lived. After Jesse killed Todd she called Todd’s phone, expecting confirmation that Walter was dead. Instead Walter picked up: turned out not only that was he alive but also that he had also replaced the “stevia crap” she used in her tea with ricin the last time they met. Presumably she won’t be back.

Walter was just about to turn himself in when he saw Gretchen and Elliott on Charlie Rose, talking about how little the now-infamous drug kingpin had to do with their success. He tracked them down, dropping millions of dollars on them with instructions to form a trust fund for his family. Perhaps El Camino will provide an update on whether they actually go along with Walt’s plan.

In the series finale Hank’s widow, Marie (Betsy Brandt), called her sister, Skyler, with news about Walt’s return. Will Marie figure in Jesse’s story? Probably not. But Gilligan has a sneaky way of bringing characters back, so we can’t rule it out, especially if Jesse re-enters Skyler’s life for some reason.

Gilligan has confirmed it: yes, Walter is dead. But the way Gilligan has played with time on both of his shows means we can probably expect a flashback or two on El Camino. Those could open the door to many characters who were dead when the series ended, including Jesse’s speedball-shooting ex, Jane (Krysten Ritter); Gus (Giancarlo Esposito); Gus’s right-hand, Mike (Jonathan Banks); and even Hank. The big question, however, is whether Walter will be among those familiar faces. Would it truly feel like Breaking Bad if he weren’t? – New York Times