Gillian Anderson ‘to play Margaret Thatcher in The Crown’ 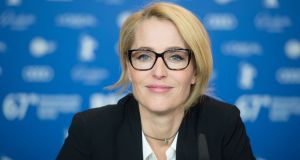 Gillian Anderson: said to be taking on the role of Margaret Thtacher. Photograph: Stephane Cardinale/Corbis/Getty Images)

Gillian Anderson is to follow in the footsteps of Meryl Streep, Patricia Hodge and Jennifer Saunders by taking on the role of Margaret Thatcher, according to reports.

Anderson, who is in rehearsals for a West End adaptation of the 1950 film All About Eve, would be latest eye-catching addition to the cast of Netflix’s lavish blockbuster.

According to the Sunday Times, she will reportedly appear as the former Conservative prime minister in series four of the show, with filming due to begin over the summer.

Much will depend on her chemistry with Olivia Colman, who has succeeded Claire Foy as Elizabeth II for the next two series of the show.

Much has been written about the reportedly frosty relationship between the Queen and Thatcher during the 11 years of her prime ministership. They found each other something of a mystery, say some. One account even suggested the Queen did mocking impressions of Thatcher and referred to her as “that woman”.

The Queen nor Thatcher spoke about their private weekly audiences. Thatcher’s biographer Charles Moore has described the former PM as being “almost paralysingly correct” about her relationship with the monarch and nervous during the audiences.

How The Crown, written by Peter Morgan, will portray the relationship remains to be seen, although a clue can surely be extracted from Morgan’s hit play The Audience, which dramatised the weekly meetings and starred Helen Mirren as the Queen. Thatcher was played by Haydn Gwynne, whose character gave the Queen an absurdly extravagant curtsey before bossily berating her over leaks.

The Crown is one of Netflix’s most expensive and most accomplished dramas, with the relationship between the royal family and politicians featuring heavily. The first two series starred Foy and Matt Smith as Elizabeth and Philip, with John Lithgow playing Winston Churchill and Anton Lesser as Harold Macmillan.

Series three and four will star Colman alongside Tobias Menzies as Philip.

Netflix has kept details of the new series under wraps with no release date announced. It has been reported that series three will cover the years from 1963 to 1976, with Harold Wilson, played by Jason Watkins, being prominent. Series four would then focus on the Thatcher years, with the introduction to the story of a young Princess Diana.

If that is the case, there is fertile territory to plough, not least the Falklands conflict and the miners’ strike. Irish Government files declassified in 2017 appear to back one famous story that the Queen was angry at Thatcher for not imposing sanctions against South Africa.

Anderson, who has had a stellar career on screen and stage, is probably best known for her portrayal of special agent Dana Sculley in The X-Files.

A spokesperson for Netflix declined to confirm or deny the reports. – Guardian