The Young Offenders actor Demi Isaac Oviawe is critiqued by the judges following her debut on Dancing with the Stars. Video: RTÉ 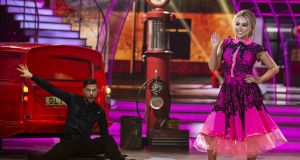 Cliona Hagan and Robert Rowinski got the top score of 21 on week two of Dancing With The Stars. Photograph: Kyran O’Brien

Tears, twirls and tangos all make an appearance as week two of Dancing with the Stars sees the female contestants competing in earnest for the first time.

Bragging rights for the episode go to country star Cliona Hagan, scoring a knock-out 21 from the judges courtesy of her blistering quickstep.

Hoofing alongside partner Robert Rowinski, she sets the dance floor alight while also conjuring with the spirit of Garth Brooks. A cheeky line-dance thrown into the middle of her performance pushes the envelope for thinking outside the box – and the panel duly swoons.

“I love people who push things beyond the bar... the fusion between the quickstep and country…very very clever,” enthuses the usually grumpy Brian Redmond.

But if O’Hagan’s score marks her as the clear rival to last week’s winner Johnny Ward (still out front with 22) then the most likely candidate for elimination is surely the likeable yet not-quite-scintillating Demi Isaac Oviawe. Her cha cha with Kai Widdrington receives a straight “nah nah” from the adjudicators.

“You’ve got to apply yourself,” says Julian Benson, as the Mallow actor dabs a tear. “Three words: practise, practise practise.”

You can’t but feel for the Young Offenders star. She is, at 18, the youngest participant this year and also has her Leaving Certificate to worry about (she seems as spooked about a looming history exam as by the disappointing 10 she scores).

Everyone else rates somewhere in the middle. Eilish O’Carroll of Mrs Brown fame/notoriety – she plays the best friend of Brendan O’Carroll’s alter-ego – has fun at the tango and receives the qualified adulation of the adjudicators. “Who could of thought that Winnie McGoogan could have tangoed like that,” says Benson.

Cleila Murphy and Mairead Ronan acquit themselves too. Ex-Fair City star Murphy and partner Vitali Kozmin have fun jiving to Billy Joel and are rated 19. And TV presenter Ronan, who reminds us again it’s nice to be in a studio in Bray rather than interviewing a rugby player on a mucky side-line, pulls off a graceful waltz with John Nolan. Her reward is a solid 18.

“Posture and body line – divine,” says Loraine Barry, though in truth the performance feels a little sleepy when contrasted with what went before and might have benefited from featuring earlier in the runner order.

Perhaps the starkest challenge, however, is that faced by former Miss Ireland Holly Carpenter, whose training was thrown into disarray when her dance partner was forced to bow out after suffering an injury at Christmas.

In steps Australian Trent Whiddon and he and Carpenter delivered a zinging salsa to Neon Lights (not the Kraftwerk song about dystopian disembodiment sadly). She scores 16 – hardly earth shattering, but impressive under the circumstances.

Having kicked off the series last week, the men are off stage for most of the evening though they troop on at the end for a group boogie to Mambo No 5. That mean less opportunity for presenters Nicky Byrne and Jennifer Zamparelli to throw puppy eyes at rugby star Peter Stringer.

Byrne nonetheless hangs on the ex pro’s every word during a sit-down lad-chat as Stringer shares an amusing(ish) anecdote about accidentally leaving without paying for his shopping during the week after he is mobbed for selfies.

“Any bread?” wonders Byrne, whose obsession with Stringer’s carbohydrate intake looks set to become one of the themes the season. He will have an opportunity to grill Stringer further next week, as the eliminations by public vote begins.

An early exit for Demi Isaac Oviawe is surely on the cards, though there’s a chance her homespun charm will be enough to ensure survival. Viewers will certainly hope she improves enough to make a fighting contest of it as the first knock-out round signals the beginning of the competition in earnest.