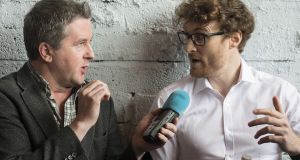 Web Summit founder Paddy Cosgrave kept his silence when he was interviewed by Philip Boucher-Hayes on Tuesday’s edition of Drivetime. Photograph: Dave Meehan

Whatever else about tech entrepreneurs, they are not renowned for their timeless glamour. So kudos of a kind is due to Web Summit founder Paddy Cosgrave, whose radio appearances call to mind the glitzy character of Lina Lamont from Singin’ in the Rain, the classic Hollywood musical about the advent of sound in films.

As memorably portrayed by Jean Hagen, Lamont is a vain silent movie star whose image is shattered when her grating voice is captured on microphone. Cosgrave similarly keeps his silence when interviewed by reporter Philip Boucher-Hayes on Tuesday’s edition of Drivetime (RTÉ Radio 1, weekdays), but when he does eventually speak on air the following day, it doesn’t ruin his image. Rather, it reinforces the impression of Cosgrave as a prickly self-publicist.

Cosgrave’s taciturn performance comes after his admission that he was behind an anonymous Facebook ad campaign aimed at highlighting loopholes in Ireland’s corporate tax regime. As Boucher-Hayes tells Drivetime host Mary Wilson, he meets the entrepreneur in his company headquarters to ask him about lax tax laws but also about his own “controversial” Facebook ads.

Boucher-Hayes recounts how Cosgrave abruptly walked out as the interview was about to commence, and remained completely quiet when the reporter caught up with him. Unsurprisingly, the recording of this one-sided interview has a comedic quality. “Is that it, interview over then?” asks Boucher-Hayes. Silence. “You’re not going to talk to me because you won’t answer the questions about the way you started the debate?” Silence again. And so on, until he admits defeat.

In its own farcical way, it’s an arresting item. But the focus is squarely on Cosgrave, with Boucher-Hayes claiming the entrepreneur took offence at a remark about his offices. Ironically, it’s the reporter who outlines the complaints against Ireland’s corporate tax system, archly noting the issue has previously been raised in the Dáil and at European level.

When Cosgrave actually speaks on Today With Sean O’Rourke (RTÉ Radio 1, weekdays), he says that his reticence was designed “to prolong the interest in this story”. He makes a robust argument that Ireland has “mainlined tax avoidance” and dismisses O’Rourke’s oddly anachronistic charge of “national sabotage”, saying it’s his “patriotic duty” to highlight “tax loopholes that are damaging to the interests of most people”.

Yet while Cosgrave’s central point has real relevance for contemporary Ireland, the message is overshadowed by the medium. Just as there are troubling echoes of the online shenanigans of the 2016 US presidential election and the Brexit referendum in his social media campaign, Cosgrave’s appearance on O’Rourke’s show does little to dispel the notion that he needs to be the smartest guy in the room.

Though describing himself as “a ticket salesman”, he has a lofty air as he quotes academic studies and UN reports against Irish tax laws, as though such concerns have never been raised before. He seems indifferent to the ramifications of his social media campaigns, suggesting his trolling was necessary to “light a fire”.

Later, during his rematch with Boucher-Hayes on Wednesday’s Drivetime, he comes across as smug yet spiky. After offering the reporter a facetious €500 prize for ignoring “the elephant in the room”, he sounds irritated when quizzed about his company’s US tax arrangements. Ultimately, the pressing matter of Ireland’s shonky corporate regime gets lost amidst all the capers. Cosgrave’s manner, meanwhile, makes one nostalgic for the silent era.

Elsewhere, Seán Moncrieff (Newstalk, weekdays) examines the latest revelations about the underhand behaviour of that masterful social media troll, Donald Trump. In this case, however, the discussion concerns the US president’s dirty tricks on the way to the clubhouse rather than the White House, as his dishonesty on the golf course is outlined by American sportswriter Rick Reilly, who has written a book on the subject.

Even for those suffering from Trump fatigue, the interview provides fresh material for outrage, this time at the pettiness rather than the enormity of the transgressions. According to Reilly, Trump is a serial cheat, who surreptitiously moves his own ball into favourable positions while sabotaging his opponents’ shots. “You have to have a kind of sickness that requires you to be number one at all times,” Reilly says.

It’s an entertaining conversation, even for those who know nothing about golf. Reilly helpfully explains the game’s Debrett’s-like etiquette, likening Trump’s propensity for driving his cart on the greens to “hanging your laundry in the Sistine Chapel”. Unsurprisingly, Trump’s golfing antics echo his zero-sum worldview. “He has the idea somehow that you have to cheat your opponent before he cheats you,” Reilly says, “and really, that’s kind of how he goes through life”. It certainly putts Trump in context.

Meanwhile, following the catastrophic Notre Dame fire, Ivan Yates invites Richard Boyd Barrett TD and Senator Marie-Louise O’Donnell on to the Hard Shoulder (Newstalk, weekday) to debate the morality of French tycoons pledging millions to rebuild the cathedral while overlooking wider deprivation. It’s a potentially interesting discussion about social obligations and the primacy (or otherwise) of cultural funding, but gets sidetracked by Yates’s constant barracking of his guests.

The host sets the tone by introducing Boyd Barrett as “our favourite pinko lefty liberal”. This is as close as Yates comes to sparkling wit. When the TD says cultural heritage should be protected, the host interjects: “That’s why we’re paying penal taxes”. By way of balance, he says O’Donnell is only interested in “snobby culture”, and sounds pleased at being called a philistine.

It’s all aimed at ratings, of course. But Yates’s disruptive approach is both deeply dispiriting and eerily familiar, with all insults pitched as banter while bullishly promoting his own opinion over all else. Having a grating voice needn’t be a barrier to a career on the microphone.

Despite her reliably informative bulletins, RTÉ business reporter Petula Martyn may be feeling self-conscious during her morning shifts. With news anchor Bryan Dobson and presenter Shay Byrne both confusing her name with that of 1960s singer Petula Clark – as highlighted here recently – other colleagues seem spooked by her presence.

On Thursday, as the business news finishes on Rising Time (RTÉ Radio 1), host Lillian Smith thanks Martyn, then adds: “Did I underline her surname twice? Yes, I did.” Just imagine the confusion if Martyn’s first name was Dusty.

Spaced-out Barcelona gets its groove on
5

John Hume: The US connection and the making of a documentary
7

John Boyne: ‘I am not a provocateur. I don’t seek to hurt people’
8 The origin of the Word gospel
9

Belfast, 1969: The Troubles were coming
Real news has value SUBSCRIBE