Wicked: A dazzling display of stagecraft and social commentary

Based on The Wonderful Wizard of Oz, this asks who was the Wicked Witch of the West? 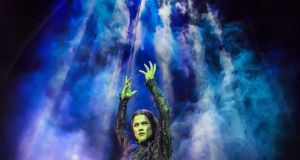 The Wicked Witch of the West is also known as Elphaba (Amy Ross), whose visage is a luminous shade of verdigris. She is feared by her peers at Shiz University, but to her new roommate, the angelic blonde Glinda (Helen Woolf), she is merely repellent. Elphaba, however, has magical talents, and she is taken under the wing of Madame Morrible (Kim Ismay), who plans to harness them for nefarious purposes. But Elphaba has more empathy than ambition. The message of this modern fairytale is spelled out loud and clear: moral purity, just like popularity, like beauty, is really only a matter of perspective.

Wicked’s fantastical setting is a smokescreen for more realistic concerns. The musical’s appeal is its celebration of difference, and Schwarz’s accessible score is similarly inclusive, offering zingy pop irony in “Popular”, uplifting anthems like “Defying Gravity”, as well as operatic ensemble pieces for the more serious musical aficionado. As lead performers, Ross and Woolf match each other in lyrical spars, but they also seize their solo opportunities with gusto. The first act builds towards “Defying Gravity”, the musical’s best-known song, whose rising melody crescendos into a moment of visual wonder, as Elphaba transcends her social limitations and takes to the sky, illuminated by the iridescent glow of Kenneth Posner’s lights. It is probably the most awe-inspiring scene you will ever see on stage.

Act Two struggles to shake the shadow of that spectacular number, and the plot glides along as fast as a witch on a broomstick towards a compromised happy ending. Still, those familiar with Baum’s book and the iconic 1939 film adaptation will enjoy the intertextual visual clues that director Joe Mantello layers upon the stage in the final scenes with the assistance of Susan Hilferty’s costumes, which blend a palette of green to amazing effect. A younger demographic, meanwhile, the ideal audience for this transformational fable, will just enjoy it for what it is: a dazzling display of stagecraft and social commentary.

Autre Monde: ‘I take great pride in adding scars to my body’
8

Patrick Freyne: Homeland is a tool for teaching Americans geography
10