Fearless review: no case is too big, no detail too small 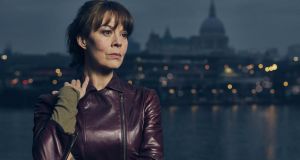 What does Fearless (TV3, Wednesday, 10pm) have to be afraid of?

The answer, to judge from the opening episode of this new drama series created by Patrick Harbinson (a conspiracist behind Homeland, 24 and Law & Order), is pretty much everything. “Please help us find the truth,” implores the ex-wife of a man jailed for the murder of a teenage girl 14 years ago. This is already a lost cause, an open and shut case, so cold now it would give you frostbite. You have come to the right lawyer.

Emma Banville (Helen McCrory), a tough-talking, chain-smoking, whiskey-swilling human rights lawyer, clearly enjoys these kinds of odds. No stranger to controversy, she takes the case and waives her fee over the objections of practically everybody. “This firm has always preferred ridicule to money,” says her supportive employer. That is just as well, because the key to unravelling this paranoid thriller may be to follow the ridiculous.

Filmed in nervous sways and urgent lurches, Fearless evidently wants to be taken very seriously. Even the credits sequence, which so far bear no relation to the show at all, offer solemn credentials towards its political heft: a child walks along a broken wall daubed with hateful images of Thatcher, Blair and Trump. Who are the real criminals, right?

As unlikely as it seems, this case has not only riven families and a community, its cover-up goes all the way to the top. The original prosecutor (Wunmi Mosaku) now heads British counter-terrorism, an unenviable task which leaves little time for good acting. This literally puts Banville on her radar – the lawyer has an electronic tracker – because she shares her home with the wife of a suspected Isis terrorist. (Actually, he is more likely a Syrian doctor.)

This is one of the problems with the show, though: Banville is glorified for charging heedlessly into a world of murky intrigue, but Fearless hastens after her to shoo away any such ambiguities, as though it was nervously defending its own protagonist. Yes, the original confession was indeed coerced, it explains in laborious flashback. No, Banville is not a publicity hound with poor judgment. Yes, the cover-up implicates the police, an RAF base, and – in the recruitment of two special guest stars who personify Britain’s vexed “special relationship” – Michael Gambon (as some kind of Cambridge don and peer) and Robin Weigert (as some sort of US government spook).

How Banville is expected to get to the bottom of this morass while the show keeps heaping her with character complexities may yet prove her biggest challenge: hard-living and frugal, she is also trying to adopt a child with her partner (a stand-up guy played by actual stand-up comic, John Bishop) while cradling her dying father in hospital.

All of this would be easier to process if it didn’t seem so comically accelerated. Director Pete Travis’s signature shot is a sudden zoom forward, like a nervous twitch, and that’s similar to how the plot progresses. The dialogue does not help. “You sound completely nuts!” someone will say. “Then I must be on to something!” Banville will retort.

In these careening political times there is, at least, a hard pulse of distrust towards authority to which this show cannily panders. Perhaps Fearless will not squander our sceptical sympathies. But right now it’s hard not to fear the worst.

Lottie Ryan: My first Christmas as a dog owner