Poldark: He’s so fertile, I may have got pregnant watching him

The melodramatic, gripping, entertaining series is back, writes Patrick Freyne 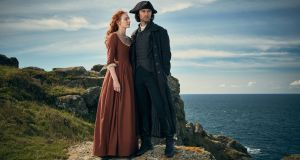 18th century mining mogul, stealth Irishman and professional hunksman Ross Poldark is very fertile. As someone who has studied 18th-century medicine (the points were low) I believe this may be due to all that cliff-top horse-riding he does and possibly regular leechings.

And so Ross’s first love, Elizabeth, is pregnant with his child but married to his arch-enemy, the upwardly mobile rotter George Warleggan. This is the key dramatic driver of the new series. The elitist banker Warleggan is, once more, pitched against the tin-mining man-of-the-people Poldark, as if they’re the protagonists of some sort of olden-days Brexit.

We know Warleggan (Jack Farthing) is a baddy because he enjoys the effete pastimes of the age – thwarting villagers and standing in a drawing room with his hands behind his back and a puss on him.

In contrast, whenever we cut to Ross (Aidan Turner) and his saintly wife Demelza (Eleanor Tomlinson) they are carrying bales of hay, or pumping water, or punching sheep, or wrestling horses. They are generally to be found breathing heavily and perspiring, with a lock of hair in their faces, something which has no effect on the general viewer whatsoever.

Poldark, all in black, his brow furrowed like an Olde Tyme goth, has much on his mind. Demelza wishes he didn’t always “rise before dawn” Fine-Gael-style as he walks by, once more, carrying a cow over his head or something. “Everyone has shadows,” he explains later. “The trick is to outrun them.”

This shows a basic and panicky misunderstanding of the science of shadows, but we’ll let it pass. It’s the 18th century.

Over in Warleggan’s place George is trying to wean the family off Ross’s earthy influence. There’s Ross’s Aunt Agatha, who hints darkly about disasters to come from the corner of the room, much like a newspaper columnist or Twink.

And then there’s Elizabeth’s son, Geoffrey Charles, who has never read any old English novels about what happens to the first children of remarried English aristocrats, and so is unwisely insolent towards George.

In a moment of rebellion, he runs off with Ross who shows him how to manfully batter the inside of a cave with a pickaxe, thus inculcating him with a transgressive love for manual labour and, possibly, shirtlessness.

This tuneful duo arrives to bring news that Demelza’s father is dying, and we are promised, in a teaser for next week, that one of them will divest himself of his horrible chafing shirt. Shirts are so uncomfortable. I regularly take my shirt off, because, as you know, typing is manual labour (editor’s note: that reminds me, you’ve a meeting with HR today, Patrick).

There are minor subplots. Caroline Penvenen, a friend and local pug-farmer (well, she has a pug), is marrying noble military doctor Dwight Enys in defiance of her kindly, slowly-expiring guardian Bergerac (John Nettles). Geoffrey Charles also bonds with his new governess, his cousin Morwenna, who gazes lustfully at hunky Drake, no doubt contemplating his Hotline Bling.

Poldark is, as always, almost bizarrely gripping and entertaining. Possibly due to its roots in the novels of Winston Graham, it never undermines its historical strangeness with high-concept notions or overly prescient references to the internet or the millennium bug or Jeremy Corbyn. It looks amazing. Everything is sun-dappled or candle-lit.

And then there’s the beautiful, ocean-battered coastline of Cornwall along which Ross and Demelza ride when in emotional turmoil and which some liken to “another character on the show”.

Sadly, it hasn’t yet been given any lines (“Whatsa matter Mister-a-Poldark?” for example) but it is spectacular. It is, as you know, played by Timothy Spall.

It’s the 18th-century so life is hard. There are references to the war which will, I think, dominate later episodes. There are two deathbed scenes (for nice Ray Penvenen/Bergerac and Demelza’s brutish father) and a difficult childbirth scene which all occur under the eerie shadow of “a black moon”.

Elizabeth spends the episode trying get thrown from a horse or flinging herself down stairs in fear that George will listen to Aunt Agatha’s hints about the child’s parentage and figure out that Elizabeth is nine months and not eight months pregnant.

The latter action apparently causes her to go into labour. Ross spends a bit of time lurking outside the window spying at this point, which is pretty weird behaviour even for him (this show expects you to forgive a lot).

Anyway, it’s very important for Elizabeth that there’s no indication that she might be giving birth to Poldark’s child. The baby comes out shirtless, brooding, riding a small horse and wearing a tricorn hat.

“He favours you, I think,” says Elizabeth to George, chancing her arm.

“Yes,” says George, a little desperately, as the baby moodily gallops along a clifftop with a sheep under his arm. “I see the resemblance.”

Back at the Poldark residence Demelza tells Ross that she too is pregnant, and to be honest, after an hour watching I’m feeling a bit pregnant myself. “Curse my hunky fertile genes!” cries Ross Poldark shaking his fist at the heavens in anticipation of an excitingly tumultuous eight episodes to come.

Okay, he doesn’t say the last bit but you get the picture. That Poldark, what’s he like?