Matthew Perry as Ted Kennedy: the fake nose and ears are not a good look 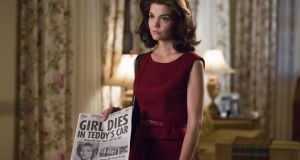 Katie Holmes as Jackie Kennedy Onassis in the miniseries The Kennedys: After Camelot which aiirs on RTE on Friday. Photograph: Ken Woroner/Reelz via AP

This Friday, Matthew Perry, with the help of a fake nose and two fake ears, appears in the gripping biopic Mr Potato Head: Dream’s End. The tale of Mr Potato Head is indeed a sad one – focusing on how he fails to please his overpowering mother, Ma Potato Head, and grapples with his alcoholic and bitter wife, Mrs Potato Head.

I would like to see, and ideally write, that mini-series. Instead the prosthesis-enhanced ex-Friend is actually playing Teddy Kennedy in The Kennedys: After Camelot (Friday, RTÉ1), which is about a family of potato heads of an entirely different sort. It’s a sequel to The Kennedys and it follows the travails of that overexposed clan of shysters in the wake of – spoiler alert – the assassination of John and Bobby. You know, the interesting ones.

John does not appear. Bobby (Barry Pepper) appears briefly at the start, looking 20 years younger than his younger brother, to reinforce that, in this universe, Teddy is Chandler Bing with a fake nose.

Ted is not the only focus. Katie Holmes also appears as Jackie Kennedy or, possibly, the owner of an enchanted Jackie Kennedy wig that gives the bearer notions. Given that the main dramatic incident in this series is the horrific Chappaquiddick incident, in which a drunk Ted Kennedy drove Mary Jo Kopechne into a river and then failed to alert the police, Jackie should really be superfluous to the plot. Instead, she’s put centre-stage and treated much like Joey was treated on Dawson’s Creek, as a bland figure inexplicably beloved by all and sought for her irrelevant counsel and big sad eyes (the actress’s own).

Onassis is the type of billionaire who, when delighted by children frolicking on a Greek beach, enunciates the words “Ha ha ha!” in a generic “foreign” accent (to be fair, this is also how I laugh). He has acquired Jackie as though she were a collectible (she doesn’t mind) and asks, when Jackie wishes to introduce him to the Kennedy clan, if it is “to kiss rings or asses” (Neither option is ideal, to be honest, lest parts of Aristotle’s face come off in a crevice). Jackie finds this outburst hilarious altogether.

All in all, this is the type of show in which characters blissfully recount an idealised future before a predictable tragedy and where people stop just short of saying things like “how ironic!” For example: “It will be wonderful when we’re back in the White House, ” says Jackie to Ethel Kennedy early in the episode. “Oh oh!” say the audience. Moments later Bobby Kennedy is shot. Dramatically it’s all – much like the artificial beak attached to Matthew Perry – very on the nose.

There is talk of a Kennedy curse. We see Joe Kennedy, incapacitated in a bath chair, communicating with a tiny blackboard (like yourself with a hangover). Rose Kennedy tortures her vowels like Gloria Swanson in Sunset Boulevard and roams the corridors of Camelot, where the extended family live and love like a filthy-rich version of the Waltons. Teddy just looks sad all the time, but I suspect this wasn’t in the script. There’s a moment when he sits up in bed and screams, which was probably filmed surreptitiously in Matthew Perry’s trailer after a long day on set.

And yes, the real drama, which should be the entire focus of the miniseries come from the horrible events at Chappaquiddick and the cynical Kennedy PR campaign and coverup that ensued. It’s problematic, because no one outside Ted Kennedy knows exactly how that poor girl died. And it also suggests that the Kennedys were never more than a bunch of upwardly mobile opportunists all along and to remind us that there have always been second acts in rich American lives.

Anyway, JFK once sat on Irish mantelpieces alongside Mother Theresa and Padre Pio. These portraits have in recent times been replaced by Dermot Bannon, Twink and Wagner from The X-Factor (if my relatives are anything to go by). America, however, never quite got over the Kennedys and this miniseries is further evidence of that. Still, you’ll enjoy this slice of hokey melodrama if, like me, you enjoy a good wig.

Big Brother is back this week and I don’t mean the elder Kennedy, I mean that torturous metaphor for the British body politic that now airs on Channel 5/TV3. I know. I feel sad too. The producers are embracing the Big Brother house as post-Brexit isolationist Britain “the greatest democracy on earth”, reconfiguring the set to resemble a country village and filling it with people who say things like, “I’m not really a believer in love. Love is a weakness” and “That orange man, what’s he called? He got president. If he got president maybe I can get Big Brother.”

Luckily, Springwatch is also on all week (BBC2). There we can watch wild critters being absolute arseholes to each other while the presenters make excuses for them. When a jackdaw savages a nest-full of swallow chicks, for example, Chris Packham (the owner of some wonderfully bequiffed plumage himself) remarks that “cutesy-wootsy, fluffy-wuffy, little jackdaws… need food too!” Co-host Michaela Strachan agrees. “You can empathise with the prey, but you mustn’t demonise the predator,” she says, channelling many on the alt-right.

Then, at one point, we witness a tiny bird of prey swallow a vole corpse whole. “Who ate all the pies,” says Strachan. Which is brilliant. Yes folks, you’ve just watched a BBC television presenter fat-shame a baby barn-owl on live television. God, I love Springwatch.