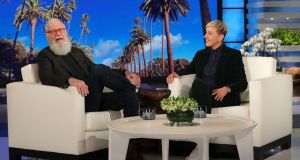 Ellen DeGeneres with David Letterman on her show in 2019. She is a powerhouse for Warner Bros Television. Photograph: Michael Rozman/Warner Bros

To millions of viewers, The Ellen DeGeneres Show has long been a TV oasis, a place for entertaining celebrity interviews, light jokes and plenty of dancing led by its cheerful host. In recent weeks, the facade has cracked. On Monday, Warner Bros Television, the studio behind the syndicated daytime talk show, confirmed that it had parted ways with three of the show’s producers: Ed Glavin, an executive producer; Jonathan Norman, a co-executive producer; and Kevin Leman, the head writer.

The moves came during an investigation of the show’s workplace, which is still being conducted. The review was prompted by a report published last month by BuzzFeed News based on 36 interviews with former staff describing a “toxic work culture” in which some said they had experienced “racism, fear and intimidation”.

One interviewee said one of the show’s writers had told her, “I’m sorry, I only know the names of the white people who work here.”

The former employees on the show who shared their accounts laid most of the blame for their bad experiences on Glavin and two other top producers, Mary Connelly and Andy Lassner. Warner Bros said Monday that Connelly and Lassner would remain in their roles.

In a second BuzzFeed News investigation, former staff members accused Leman of sexually harassing a number of employees. Leman has denied “any kind of sexual impropriety”.

DeGeneres, a comedian and host who has been a staple of US daytime TV since The Ellen DeGeneres Show made its debut in 2003, has come under fire recently for claiming ignorance of how her show was run. On Monday, she informed her staff of the changes via video conference. She also said that Stephen Laurel Boss, the DJ known as tWitch who plays music during the show and serves as her sidekick, would join the programme’s executive producer ranks.

DeGeneres also apologised to her staff during the video conference, her second apology in recent weeks. In July, she sent the programme’s employees a statement that read, in part: “On Day 1 of our show, I told everyone in our first meeting that ‘The Ellen DeGeneres Show’ would be a place of happiness – no one would ever raise their voice, and everyone would be treated with respect. Obviously, something changed, and I am disappointed to learn that this has not been the case. And for that, I am sorry.”

Variety first reported the changes in leadership at The Ellen DeGeneres Show. At 62, DeGeneres is one of the richest performers in television, as well as a one-woman powerhouse for Warner Bros Television. In addition to working under the studio to make her talk show, she is also a top producer and star of another Warner Bros production, the NBC prime-time hit Ellen’s Game of Games.

Glavin and Leman both worked on that show; on Monday, Warner Bros said they would no longer be a part of Ellen’s Game of Games. The third season of that show is scheduled to start August 26th.