‘Be kind to everyone’: Ellen DeGeneres defends hanging out with George Bush 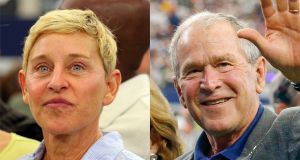 Ellen DeGeneres typically kicks off her chatshow with a set of jokes. Yesterday she took a different approach.

The 61-year-old comedian responded to online criticism brewing over her hanging out with the former US president George W Bush at a Dallas Cowboys American football game on Sunday. Critics, who are predominantly part of the LGBT community, derided DeGeneres for getting close to a president who stood against the legalisation of same-sex marriage.

Multiple photographs and clips were uploaded online showing the comedian and former president talking and laughing during the football game. The two sat in exclusive suite seats. (DeGeneres later clarified she was invited by the Cowboys’ owner, Jerry Jones, and did not know Bush would be there.)

The pushback was swift. LGBT publications voiced their anger at Ellen calling Bush a “friend”. “When it comes to Bush, we’re not talking about someone who released a book of remorse or went on a press tour where he repeatedly apologized to us (or the Iraqi people),” Neal Broverman wrote in the Advocate wrote. “Unlike DeGeneres, I refuse to grade presidents on a curve.”

Out Magazine tweeted similar disapproval: “Ellen DeGeneres laughing it up with someone who has actively tried to harm our community feels disappointing, irresponsible, and dangerous.”

DeGeneres chose to explain her actions but not apologise for them. “Here’s the thing,” she said at the start of her show on Tuesday. “I’m friends with George Bush. In fact, I’m friends with a lot of people who don’t share the same beliefs that I have. We’re all different. And I think that we’ve forgotten that that’s okay that we’re all different.”

George W Bush had a dismal record on LGBT rights during his presidency, and his administration did little to add protections for the community. In 2004 he came out in support of a proposed constitutional amendment that would have banned same-sex marriage in the United States. He was also against the Employment Non-Discrimination Act, which proposed federal legislation that would have prohibited firing someone because of their sexuality or gender identity.

Many people from the LGBT community have grown increasingly critical of DeGeneres’s actions. She was the subject of numerous think pieces and angry tweets after she invited Kevin Hart on her show to apologise for controversial jokes he made about beating up his son for displaying effeminate behaviour. Many saw the invitation as DeGeneres putting her celebrity before her LGBT identity.

She re-emphasised her guiding philosophy on her show yesterday. A philosophy that stands in stark opposition to today’s cancel-everything zeitgeist. “When I say, ‘Be kind to one another,’ I don’t mean only the people who think the same way that you do,” the talkshow host clarified. “I mean be kind to everyone. Doesn’t matter.” – Guardian