Eight shows to watch on Netflix and Amazon in November

Margaret Atwood weaves her magic, ‘6 Days’ is on fire, and Jim Carrey returns 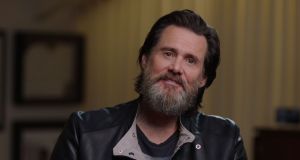 Jim Carrey returns in ‘Jim & Andy: The Great Beyond - The Story of Jim Carrey & Andy Kaufman With a Very Special, Contractually Obligated Mention of Tony Clifton.’

Margaret Atwood has become the primetime prophet of modern streaming services. Alias Grace may have some sartorial similarities to The Handmaid’s Tale but these bonnets and aprons are firmly rooted in our past, in the dark historic subjugation of women. Set in the 1840s, it follows the story of domestic servant Grace Marks (Sarah Gadon) who was convicted of the murder of her employer and his housekeeper.

In her novel, Atwood takes the bones of this brief, brutal biography and weaves a fictional tapestry over it, one where Grace tells her story to a psychologist who attempts to ascertain if she is guilty or fit to be released. Brought to life by the ambitious and groundbreaking screenwriter Sarah Polley and the unflinching eye of director Mary Harron, this is no drizzly Sunday evening melodrama. The pain and trauma Grace suffered as a disposable woman and the injustice of being a voiceless part of her master’s chattel is graphically explored. As the story unfolds it becomes less linear and clean then an average period drama as it shifts into the hazy realm of ambiguity. Somewhere between myth making and memory lies the truth.

6 Days is the dramatic retelling of the 1980 Iranian Embassy hostage crisis, in which six armed gunmen took 26 people hostage before an SAS team stormed the building in full view of the nightly news cameras. The film is shot from three main perspectives involved in the siege: the negotiators, led by Mark Strong as Max Vernon, the SAS, with Jamie Bell as the impressively monikered Rusty Firmin, and the media, with Abbie Cornish giving her best marble-mouthed Kate Adie impression.

Sometimes it can feel like Jessica Biel never existed. It’s as if we collectively made her up to add to a list of other actresses in 2002, a name that came before Blake Lively or after Rachel McAdams. She was somewhere out there doing something that no one managed to see. Well, now she’s starring in new Netflix thriller The Sinner where she plays an unassuming young mother who carries out a random act of violence on an apparent stranger, leaving a beardy Bill Pullman to attempt to mull over the case.

Based on the Petra Hammesfahr novel it has the intense mood of Gone Girl coupled with the sultry seduction of The Affair, with a flashy entertaining soap-opera feel. Already a ratings smash when screened earlier in the US, The Sinner looks likely to run as an anthology series and has finally given Biel something to chat about other than swapping toddler tales on the red carpet with Giuliana.

The sweetly surreal Lady Dynamite was a curious breakout hit for alt-comic Maria Bamford. A challenging but charming sitcom, it explored her real-life struggles with mental health and attempted to break the stigma surrounding it. With its chaotic, over-the-top style and uncompromising lead, it felt like a weird soul sister to Amy Sedaris’s cult classic Strangers with Candy or akin to Kristen Wiig’s brilliantly nuanced performance in the darkly comic Welcome to Me.

Now back for a second season we’re further down the rabbit hole. In a meta move, fictional Maria is pushed into creating a comedy version of her life story in a “bingeable format” by her hyper-aggressive agent Karen (played by a ferocious Ana Gasteyer). Meanwhile her personal life is beginning to blossom as she tentatively forms a new relationship. This series, like Louie, also features flashbacks to her troubled teen years in an attempt to tease out the root of her issues.

Although season two may not have the potency of the original series, it’s still a welcome relief in a cultural era of super strong women to see a woman admitting fragility and that her life is in flux.

Although her on-screen life (unlike many of her counterparts) may not be that inspirational or aspirational, the fact that she finds the opportunity to laugh her way through it and come to her own resolutions is the winning formula that makes Lady Dynamite such a dazzling firecracker.

Mudbound is director Dee Ree’s sprawling Southern Epic which follows the fortunes of two families (one white and one black) who are attempting to deal with their lives in the aftermath of the second World War. Starring Carey Mulligan, Mary J Blige and Jason Mitchell, it focuses on the racial tensions, prejudices and fractured friendships that were dormant during wartime and have subsequently reignited with a new ferocity.

A complex tale stretched through multiple narratives, it could be an all-important Oscar contender for Netflix.

Jim & Andy: The Great Beyond - The Story of Jim Carrey & Andy Kaufman With a Very Special, Contractually Obligated Mention of Tony Clifton

Is method acting a challenging attempt to inhabit someone’s very being? Or just a pretentious excuse to behave in a disrespectful, reprehensible manner towards co-workers? Viewers can make up their own minds about Jim Carrey and his dedication to his art when this documentary about the filming of Milos Forman’s Andy Kaufman biopic Man on the Moon hits Netflix. Carrey pushes buttons and boundaries while getting to grips with the troubled anarchic spirit of the 1970s comedian by remaining “in character” as Kaufman or Kaufman’s alter ego – boorish lounge lizard Tony Clifton – for the duration of the filming, on and off set.

It’s also a study of the irascible, uncontrollable comic mind, and the elusive threads of genius running through Kaufman and Carrey and their desire to unsettle the status quo. The documentary is interspersed with interviews with a present-day Carrey analysing and reflecting on his own behaviour at that time, and they reveal the profound effect the role and the entire experience had on him and his subsequent career choices.

Steven Soderberg is obviously the man for the job, telling the story of smoldering outlaw Roy Goode (Jack O’Connell) on the run from various gruff-voiced, tobacco spitting enemies, who eventually settles in the town of La Belle, New Mexico, which is populated only by women (this Wonder Woman island but dustier).

There he finds cowboy Lady Mary from Downton Abbey (Michelle Dockery), who he starts a dangerous flirtation with while trying to get to grips with the town’s other feisty women (who seem like variations on Renee Zellweger’s character in Cold Mountain) before his foes sniff him out and wreak havoc on the femme frontierland.

It was just shy of a year ago that we were all whisked back to Stars Hollow for a fond if not entirely satisfying holiday with those Gilmore Girls and now its creator Amy Sherman-Palladino has flown the Netflix coop perhaps never to return, and is shacking up with the Loganesque Amazon Prime for her new venture.

The Marvelous Mrs Maisel might make up for the death of Doose’s Market. More sharp and salty than its cutesy predecessor, the show stars Rachel Brosnahan as a straight talking 1950s housewife who after a personal catastrophe impulsively (and drunkenly) performs a zingy standup routine at a comedy club, which opens up a new world of possibilities to her.

An exploration of the limitations put upon women of that era and an examination of the then subversive notion of the “funny” woman, it’s also an opportunity for writer Sherman Palladino to put her rapid-fire one-liners to effective use.

Under the Red White and Blue: Greil Marcus’s Gatsby marred by self-indulgence
10