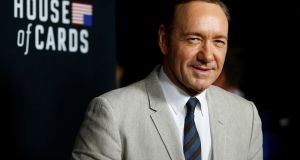 Production has halted on the sixth season of hit Netflix drama House of Cards following a historical harassment allegation made against lead actor Kevin Spacey.

Netflix and Media Rights Capital (MRC) said in a statement on Tuesday: “MRC and Netflix have decided to suspend production on House of Cards season six until further notice, to give us time to review the current situation and to address any concerns of our cast and crew.”

Earlier on Tuesday, the International TV Academy announced it had withdrawn a planned award for Spacey in the wake of the allegation against him.

The actor had been due to receive the 2017 International Emmy Founders Award in New York in November, but has now had the honour revoked.

The news came after actor Anthony Rapp accused the 58-year-old of historical harassment at a party at his apartment 30 years ago, when Rapp was 14 and Spacey was 26.

Spacey said in a post on Twitter that he does not remember the alleged incident. He also announced in the same message that he is living “as a gay man”.

He said: “But if I did behave then as he describes, I owe him the sincerest apology for what would have been deeply inappropriate drunken behaviour.”