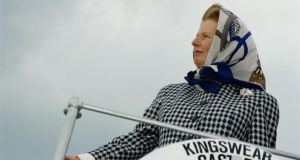 She was a polarising figure in life, so it was hardly surprising that Margaret Thatcher should prove equally divisive in death. As well the sharply differing verdicts on her legacy – and, on Irish radio at least, the balance sheet tipped well into the debit side – there were divergent opinions about how best to mark her passing.

Mooney (RTÉ Radio 1, weekdays), Derek Mooney was, for one, exercised by the issue, as he pondered the full ramifications of the former British prime minister’s passing. Did her death mean, he wondered, that the script of the male-stripper drama The Full Monty would need to be changed?

It was not as trivial a question as it might first appear. The Full Monty , both the 1997 film and the currently touring stage adaptation that occupied Mooney’s thoughts, is set in a Sheffield ravaged by the steel-mill closures of the Thatcher era – and one scene featured a cleaner spitting on a bust of Thatcher at the local Conservative Club, raising obvious questions of sensitivity for the day that was in it. (The spitting scene was altered on the night, Mooney told listeners the following day.)

Even so, the presenter sounded discomfited that this ostensibly light-hearted and much-anticipated play was now overshadowed by its political subtext. In advance of the play’s opening night in Dublin, the reporter Brenda Donohue had prepared a suitably saucy item on a real-life male stripper doing his rounds, but in the changed context of Monday it sounded wan.

Mooney himself took a novel tack on the news. Hearing that the late premier had died at the Ritz Hotel in London, he commented that he would be uncomfortable sleeping in a bed where someone had passed away. When some listeners took offence at this, Mooney reacted tetchily, betraying the petulant streak he sometimes exhibits when his show is not proceeding as smoothly as he would like.

But Mooney’s show also provided the most viscerally honest reaction to Thatcher’s death. The host spoke to John Law, a former steelworker and teacher he had met in Sheffield, who had been eating lunch at a pub in his hometown when the news was announced.

“A massive cheer went up,” Law said, adding that he had joined in the revelry. “If somebody has brought privation and want to your family, you’ll be cheered to hear she’s passed,” he explained.

Mooney sounded nonplussed at this hostility, saying it was hard for people in Ireland to comprehend. “We were removed from it,” said the presenter, a remark that suggested he had not paid much attention to events north of the Border during the 1980s, unlike his guest.

“The way she treated the hunger strikers during her time as prime minister apparently encouraged a lot of people to join the IRA,” Law helpfully informed his host, “so she had some effect on Ireland as well.”

He may strive to project an innocuous blandness on current affairs issues, but Mooney provided the blank canvas for the day’s most loaded verdict.

There were other engaging takes on the matter, however. Speaking on Today with Pat Kenny (RTÉ Radio 1, weekdays), the former hunger striker Laurence McKeown claimed indifference to the news – “It’s wrong to gloat about people dying,” he said – and even sought to play down her image as the IRA’s nemesis. Meanwhile, the former Fine Gael foreign minister Peter Barry sounded appalled when Sean O’Rourke suggested on News at One (RTÉ Radio 1, weekdays) that, as a businessman, his guest might have admired Thatcher’s economic policies. “Whoa, whoa, whoa,” interjected Barry. Disagreeing with her “very right-wing views”, he said that while many sectors were to blame for Britain’s woes in the 1970s, “she chose to focus her enmity on unions”. Such arresting divergences from the expected script kept the rolling analysis on the topic from going stale.

But there were conspicuous gaps in the conversation. The one thing everyone agreed on was Thatcher’s immense achievement in becoming the first female British prime minister, which made the lack of women discussing the matter on air all the more striking. Mary O’Rourke, on The Right Hook (Newstalk, weekdays), was an exception. The former Fianna Fáil minister expressed grudging admiration of Thatcher’s ability to reduce her male ministers to “jelly beans”, but she told George Hook that, overall, she didn’t like Thatcher’s domineering style. She also peevishly remarked that the British PM didn’t trust Charles Haughey – an indication that not all Thatcher’s instincts were wrong.

It was refreshing to hear this rare, if idiosyncratic, female perspective on a show where the gripes of its cantankerous male host normally rule the roost. Lest anyone think Hook was suddenly in touch with his feminine side, however, he also expressed bafflement at the columnist Kevin Myers’s assertion that Thatcher controlled men by being “incredibly sexually charismatic”. Hook was dismayed not by the reductive crassness of Myers’s remarks, however, but by his judgment of looks. “If Margaret Thatcher was at a rugby-club disco she would never have got a dance,” he said dismissively. Having heard that, one suddenly felt a surprising surge of sympathy for the Iron Lady.

Portraits of the Irish big house, from Castle Howard to Luttrellstown
7

Rise of the killer robots: The future of war
Real news has value SUBSCRIBE