Dead Still: the most ‘un-RTÉ’ thing RTÉ has done in years

Review: Thriller set in Victorian Ireland is unapologetically pulpy, yet dares to be different 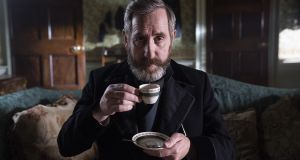 Sherlock Holmes with a Dublin lilt is so such a charming premise it’s mildly disgraceful nobody has thought of it before. And that is what we get, more or less, in Dead Still (RTÉ One, Sunday).

This thriller set in Victorian Ireland is unapologetically pulpy, schlocky even, and taps into the rich tradition of 19th century Irish gothic horror (its creators, Imogen Murphy and John Morton, obviously know their Sheridan Le Fanu from their Charles Maturin). It isn’t “about” anything and doesn’t take itself seriously. I mean it absolutely as a compliment when I say it’s the most “un-RTÉ ” thing RTÉ has put on the airwaves in ages.

It also, so far as budget allows, paints a vivid portrait of a country which, if not quite nestled at the bosom of Empire, was certainly somewhere in the vicinity. Belfast actor Michael Smiley affects a genteel Anglo-Irish accent as Brock Blennerhasset, a photographer in 1880s Dublin specialising in “memorial portraiture”: the photography of the recently deceased.

“Memorial portraiture” was the ghoulish Instagram of its day. Apparently the ultimate keepsake of a dead relative was a happy snap of them– very much expired but made up to look alive and posed with their nearest and dearest. The way the world is going at the moment, don’t be surprised if it makes a comeback.

Blennerhasset is a master of this creepy art. Yet his comfortable life in a Georgian townhouse is plunged into chaos as a photographic plate of his latest “client” goes missing. It’s been filched, it turns out, by the dead woman’s grieving husband. He’s a convict, a Fenian and speaks with a broad working class accent. His wife’s well-to-do family naturally disapprove.

The disappearance of the plate brings Blennerhasset to the attention of chippy Dublin Metropolitan Police detective Frederick Regan (Aidan O’Hare). Regan, though, has bigger worries – in particular, a series of murders in which the victim is posed just like one of Blennerhasset’s subjects and left bleed out.

There are echoes of Netflix’s recent 19th century New York thriller The Alienist, as Blennerhasset teams up with go-getter niece Nancy Vickers (Eileen O’Higgins, who played Saoirse Ronan’s hometown best pal in Brooklyn) and angsty gravedigger Conall Malloy (Kerr Logan) to track down the plate. And so the game’s afoot.

Murphy and Morton don’t bang you over the head with it but Dead Still  also alludes to the tensions around class and identity in Irish society that would eventually go off like a powder keg. Detective Regan’s accent identifies him as from the working class northside of Cork City (what an enormous novelty to hear a Leeside accent that goes beyond the “Stage Corkman” you usually encounter on Irish television). And thus the sniffy Blennerhasset clearly regards him as a glorified errand boy.

Yet these socio-political components are allowed bubble in the background whereas too often a domestic series would cosh you over the head. RTÉ doesn’t deserve all the credit: the show is produced in association with American streaming network Acorn, where it premiered over the summer.

It is nonetheless new and interesting that it seems to have drifted in from an alternate universe where Irish television isn’t just about small town shenanigans, dodgy Dubs or recycled Amy Huberman comedies. Dead Still isn’t perfect: the production values are sometimes rickety, the quirky soundtrack annoying, and there are plot-holes. But it departs from TV drama groupthink and dares to be its own thing. For that it deserves praise.