Ireland’s Got Talent final: Naas-based rapper Aaron J Hart looks like the one to beat

Four dance acts will feature in the final of the TV3 talent show, live from Dublin’s Helix 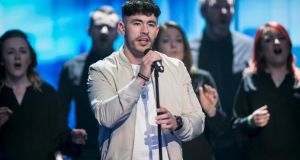 Aaron J Hart’s powerful, passionate truths about his troubles with mental health and addiction have caused a sensation.

The Irish public are slaves to the rhythm apparently. In the first series of Ireland’s Got Talent, no fewer than four dance acts have been chosen as finalists.

The 14-strong, street-dancing Dublin crew FKFT were the first to backflip into a final spot on Monday night with their In Living Colour-style retro moves and vintage shell-suits.

Then came Cork troupe RDC, whose Jacksonesque military-precision cut through the competition like a job-lot of Swiss Army knives.

The tiniest dancers were also triumphant with junior duo Kyle and Shyesha, aka Double Impact, pulling the judges’ heart-strings with their contemporary ballroom routine to Aerosmith’s Don’t Wanna Miss a Thing. They beat the Deaftones choir to the Helix stage tonight.

The hotstepping youngsters have taken over the talent show.

Even an early favourite, glamorous great-granny Evelyn Williams, couldn’t compete against this cavalcade of choreographed kids. Williams won the nation’s hearts (and Michelle Visage’s Golden Buzzer) with her raw, emotional rendition of Send in the Clowns.

With her white hair swept up into a Dusty Springfield bouffant she gamely attempted to croon her way through the singer’s hit You Don’t Have to Say You Love Me in the semi-finals, but a timing issue prevented her from delivering another spine-tingling performance – although her unstoppable charisma and irresistible warmth earned her a standing ovation.

It’s people like Evelyn Williams that make talent shows like this worthwhile. Ireland’s Got Talent gave Williams, an 81-year-old from Tallaght who said she had never been able to “get recognition”, the opportunity to appear on primetime TV and win praise– a rewarding experience whether she made it to the final or not.

Another popular act that just missed out on a chance to make it to the stage tonight was Paul Ryder, who had previously wowed the judges with his all-singing (and dancing) rendition of Bruno Mars and Jessie J’s Bang Bang.

Ryder a head-to-toe pro, upped the ante in the sartorial stakes wearing a red fringed number previously worn by pop star Rita Ora, giving him the look of an avenging superhero. Unfortunately he didn’t make the final and was a surprising wildcard omission.

Thankfully, vogueing teen Zacc Milne managed to secure his place in the final on the judges’ wildcard with his sizzling RuPaul soundtracked showstopper. He and big-voiced Ballyfermot balladeer Matt Dobbs will get another chance at glory later.

Naas-based rapper Aaron J Hart looks like the one to beat. His powerful, passionate truths about his inner demons, and troubles with mental health and addiction have caused a sensation. A bruising juxtaposition to the sweetness of other acts, Hart and Milne represent a new kind of talent.

Linda McLoughlin and Matt Dodd are the other finalists.

Ireland’s Got Talent proves that we’re still a country dancing at the crossroads but this time around at least we’re busting out those moves with some style.

The Ireland’s Got Talent live final is on Saturday March 24th at 7.30pm on TV3