Marian Finucane: Her work in South Africa ‘where no one else dared to go’

Melanie Verwoerd says she had a phenomenal intellect, a big heart and no problem showing it 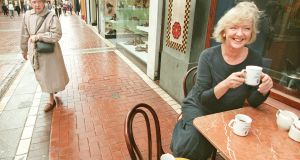 “Melanie, the chief wants us to donate a feckin’ cow! What do we do?”

I couldn’t help giggling at the exasperation in the familiar raspy voice all the way from Ireland. “You laugh, but it is your feckin’ fault that we are in South Africa,” she retorted.

I guess it was.

I met Marian Finucane in 2001. It was my first radio interview as South Africa’s Ambassador to Ireland. During the interview she asked me about the 1994 elections in South Africa. I talked about how emotional it was - the long queues, old people being pushed in wheel barrows and people waiting for days to vote. Marian looked at me intensely and suddenly she welled up. Seeing her tears I was momentarily thrown of balance.

I had told the story numerous times before to journalists, all whom would absentmindedly nod and look at their papers for the next question. But not Marian. She was listening; listening and feeling. Without a doubt that is what made Marian such an extraordinary person. Yes, she had a phenomenal intellect, but she also had a really big heart and had no problem showing it.

Having mentioned during the show that she had never been to South Africa, I arranged for her and John (her partner John Clarke) to visit. Yet, again, she was different. Yes, she would be happy to see the touristy sites, but she wanted more. Could she please stay in a township for a night (this was simply not done at the time) and could she visit an Aids orphanage?

A few weeks after their return, Marian asked to have lunch with me. “So I have the money,” she said casually. It turned out that the Aids orphanage needed money to build a hospice in one of the townships outside Cape Town as well as a day-care facility next door so that the children could stay close to their dying mums. It required a lot of money, but Marian had sorted it.

A few months later, in a wonky marquee tent the little orphans sang Molly Malone as a thank you to Marian and John as we celebrated the opening of both facilities.

For most people that would have been enough. For John and Marian it was only the beginning. They went on to build foster homes, child care facilities and schools. They started feeding schemes for orphans and child-headed households and they got anti-retroviral drugs to mums and babies. Remarkably, after the initial work in Cape Town, they went to some of the most remote places in South Africa. For almost two decades they worked where no one else dared to go.

They had to negotiate tricky cultural situations (such as the chief’s cow request) and more than once faced physical danger. At the end of their frequent trips to the projects they would often be ashen with exhaustion, but never gave up.

Today there are thousands of children and young adults who are alive because of their work. Unlike many others, they wanted to stay out of the limelight, never asking for personal recognition or reward.

On a personal front, Marian and John became my friends. They were there for me during my painful divorce. They were the first people I confided in when I found love with Gerry Ryan. John and Marian were the last people Gerry and I had dinner with, two days before he died. After his death, Marian held me and carried me through the most difficult interview I ever did.

My heart broke for John when I heard of Marian’s passing. I always admired (and silently envied) the love they had for one another. When together it felt like they were totally in sync. Their conversations flowed seamlessly, with one taking over when the other paused. Silent looks (and little grunts from John) were understood and the love between them was tangible.

The last time we met was at the Kirstenbosch Botanical Gardens in Cape Town. Although tired they were in flying form after their visit to some of their projects. After lunch we walked to the carpark and I saw John tenderly taking Marian’s hand. It is this image of them walking away hand-in-hand that I will always remember.

In South Africa, when a person who has made a great contribution to the country dies, people sing a very special lament at their funeral. “Hamba Kahle, Umkhonto. Umkhonto we sizwe”. (Go well on your journey. You were a Spear of our Nation.)

And so, dearest Marian, on behalf of the thousands of lives you touched in South Africa:

Melanie Verwoerd is the former South African Ambassador to Ireland