Clumsy thumbprints of The Office are all over RTE's The School

The kids are great, and Laura O’Mahony comes out top of the class in this mockumentary

A clip from RTÉ's new mockumentary based comedy, "The School". Video: RTÉ 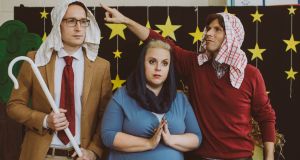 Dominic McHale, Laura O’Mahony and Tadhg Hickey in The School

The School (RTÉ 2, Thursday,10.35pm, entire series on RTÉ Player) is the latest project from Cork comedy group CCCahoots the ensemble that gave us the charming Storyland series (R)onanism in 2015. It’s a three-part mockumentary-style show that centres around the staff and pupils of the fictional St Colmcille’s National School as they prepare for their annual nativity play.

Making a good mockumentary is a delicate high-wire act that involves balancing the peculiarities and pathos of real life without slipping into formulaic sitcom territory. It can be difficult for audiences and writers to escape from the looming shadow of Ricky Gervais’s masterwork The Office and here, it’s easy to see its clumsy thumbprints all over The School’s puffed-up, main character, third class teacher Tom Hegarty (played by Tadhg Hickey). Hegarty is completely oblivious to his own incompetence, which is emphasised when he’s butting heads with new uber-efficient principal Dominic English (Dominic McHale).

Hickey’s character seems possessed by The Office’s Commander-in-Cringe, most obviously in the second episode, which features a Brentian monologue on Chumbawamba’s Tubthumping and a far too literal rumination on the rebellious nature of Jesus.

Although the series suffers from this legacy, there are moments when the characters ooze their innate Irishness and true laughs are unearthed. Nativity auditions see Hegarty reminiscing about past productions including an ill-fated 1916 tribute with a small child shouting “Brits out!”  as a rousing finale. Later he gives the nod to those who have been successful with a festive Simon Cowell-style sign off: “You’re up on two mules, you’re heading to Bethlehem!”

Tom Hegarty may be the series’ main focus but it is school secretary Briege Daly (Laura O’Mahony) that steals the show, a character who could warrant a spin-off of her own. Daly is that overly familiar, mindlessly cheery but slightly intimidating co-worker, who will corner you in the canteen to unleash an unwelcome stream of consciousness about their private life, and in the same breath let fly a barrage of vicious insults. The warmth and good-natured silliness that O’Mahony brings to the role make Briege a likeable, engaging three-dimensional character. Her authentic oddness makes her the most convincingly realistic cast member.

Sadly, within the narrow confines of the series, her pregnancy and choice of using the services of a sperm-donor is utilised as an outrageous plot contrivance mined for obvious laughs. If the almost forced “zany” elements of the show were toned down, it would have been a great opportunity to explore the interior world of this intriguing curio of office life: a puppy-dog version of Terri Coverley from The Thick of It meets Notes on a Scandal’s sociopathic Barbara Covett.

Daly aside, The School would be empty without its selection of wonderfully natural child actors, whose opinions about love and happiness in an assortment of talking-head interviews are interspersed throughout the show. This gives it a true documentary element that the clownish day-glo antics of the adults fail to capture.

The School may not have passed the comedy exam with flying colours but there’s always room to improve next term.

Melania Trump: ‘A sphinx with a rubber eraser in place of a tail’
8

Amy Schumer has made a docuseries about her pregnancy, a body in revolt
9