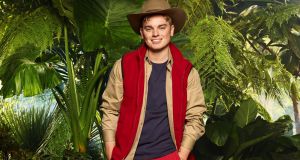 A publicist for Jack Maynard has confirmed he would be leaving ITV’s ‘I’m a Celebrity ... Get Me Out Of Here!’. Photograph: ITV/PA Wire

YouTube star Jack Maynard has left the I’m A Celebrity ... Get Me Out Of Here! jungle.

The brother of singer Conor Maynard has faced allegations of racism and homophobia in recent days after old tweets emerged online. In a statement, his publicist confirmed he would be leaving the ITV show after just over two days in order to be given the chance to defend himself against allegations. They said Maynard agreed with the decision which was “made by his representatives and ITV”.

The statement added: “In the last few days Jack Maynard has been the subject of a succession of media stories which, given his position as a contestant on I’m a Celebrity ... Get Me Out Of Here! – filmed in the Australian jungle, with no contact with the outside world, he has been unable to respond to.

“Since it is only fair that everyone should be aware of any allegations made against them and should also have the right to defend themselves, it was agreed that it would be better to bring him out of the show.”

Maynard appeared on Tuesday night’s show but presenters Ant and Dec confirmed his removal halfway through the programme, telling viewers they could not vote for him in Wednesday’s bushtucker trial.

Tuesday’s show saw Amir Khan recover his boxing champion reputation after he was again chosen to take on the bushtucker trial. The Olympian struggled in the series’ first challenge on Monday as he screamed the inevitable phrase to end the task before its completion. Voted by the public to take on the trial on Tuesday — which saw him locked in a tank which filled with water and having to open a series of boxes with a spanner – Khan recovered from his earlier woes to win food for his five campmates who already had a meal ticket and also managed to bag one more.

After battling 200 crayfish, eels, yabbies, mud crabs and jungle critters, Khan told Ant and Dec: “I was so focused. I wouldn’t let me teammates down in camp. It was so hard in there honestly. I can go back now and make my camp smile.”

He added: “It was exciting, it was challenging. It was very, very hard but we’ve already got five guaranteed meals and I’ve got one extra one for my team. It makes me very happy today. I’m very proud of myself.”

After being congratulated by his teammates, Khan offered the meal ticket to Stanley Johnson, father to Boris Johnson, who said he “shall do my best to deserve the honour”. There was some sweet relief for those without meal tickets, however, after Johnson and Georgia Toffolo bagged some brownies after successfully completing the dingo dollar challenge. – PA