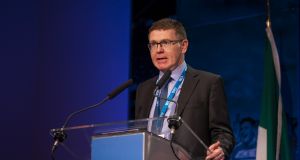 Director general Tom Ryan has said the coronavirus crisis could cost the GAA up to €60 million. Photograph: Tom O’Hanlon/Inpho

GAA director general Tom Ryan has conceded that the Association is set to ‘suffer’ financially from the COVID-19 crisis and that the hit could be as great as €60 million.

In a frank interview with Sport for Business Leadership, the GAA’s most powerful official said that they’re currently ‘at the bottom of our cash cycle’ and hugely reliant on gate receipts from the upcoming inter-county Championships to fund their activities.

But with no end in sight to the health emergency and the country remaining on lockdown, there are no certainties about when those games will go ahead, or if this year’s Championships will actually be played.

The GAA confirmed record revenues of €73.9m for 2019 with €36.1m of that coming from gate receipts but that income stream is now in danger of being wiped out entirely, or considerably reduced, for 2020.

“It’s already having a really serious impact on things,” Ryan said of the coronavirus shutdown. “Central Council-wise, there’s probably about €60m at risk. All we have is matches. That’s all we have. We don’t have an international organisation that can come to our aid. Everything that we generate is generated pretty much on the island of Ireland and it’s all generated within probably a two or three-month period of the year which is the period that could be lost to us income-wise. Yeah, we’ll suffer.

“Oddly enough, the tricky thing at the moment is cash but just from talking to other people, even in other spheres altogether, cash is the challenge for everybody at the moment. Our model has always really been, we try our best to...whatever we generate we try to filter around the organisation.

“We’ve got to manage things carefully now to make sure that however bad this year is, that we’re not paying for the legacy of 2020 in 2021 and 2022 and beyond.”

Ryan confirmed the GAA has considered a number of potential return-to-play schedules based on getting back at the start of May, June, July or even August.

He said the prospect of being forced to stage games late in the year is ‘actually not depressing’, arguing that it is ‘the one thing that reminds you that there is something at the end of it all’.

“All they are at this stage is just ideas,” he said. “You are looking at what length of period you would need to actually play off the Championships, looking at whether you would finish the leagues or not.

“In certain scenarios, you might (finish the leagues), not really for the leagues themselves in terms of the trophies and winners and so on, but they’ll have a big bearing on next year and where people are going to play.

“If there was a possibility to play some of those games interspersed in the middle of a Championship, as of when teams became available to play off a final league game, you might do that. Or you might play them before the Championship would restart in lieu of inevitable challenge matches that people would want to play.”

Ryan said club competitions and schedules would have to be factored in too.

“The shape or form it (fixtures) will take, I don’t know but it’s fair to say it will be significantly different,” he said.

On the issue of the new Tailteann Cup competition, Ryan said he didn’t know if it would go ahead, admitting it’s a ‘difficult one’ with the new Tier 2 tournament linked to the outcome of this year’s football league.

1 How Mary Pierce stepped into the light and played for herself
2 Tiger shines and Brady bites back as charity match proves an enjoyable release
3 Sideline Cut: Vignette shows why Bird is the true shark in The Last Dance
4 Ken Early: Liverpool fans, Bamber Gascoigne and a close shave in Istanbul
5 As news gets better, can the pull of The Field be resisted?
Real news has value SUBSCRIBE

Trainer Halford eyes up Guineas glory with Sinawann and Ridenza 19:01
Hogan sees Macgiloney and Cafe Con Leche as Galway Festival challengers 17:39
How Mary Pierce stepped into the light and played for herself 17:00
Odion Ighalo’s loan stay at Manchester United drawing to a close 14:43
Borussia Dortmund bidding to halt Bayern behemoth behind closed doors 14:23
Here is your handy guide to sport on television this week