‘An abiding memory was his kindness’: My two summers working with Gaybo 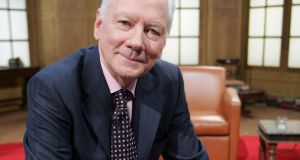 For One Night Only, hosted by Gay Byrne, featured interviews with, and performances by, well-known musicians

Many Twitter users yesterday made clear to millennials that they’d never know the impact Gay Byrne had on Ireland because they weren’t alive during the height of his career on the Late Late Show, or they were too young to understand what was going on.

That’s not quite true although we probably don’t have the same appreciation of the man who has come to be known as Ireland’s greatest broadcaster.

But having worked with him as a runner in RTÉ toward the end of his broadcasting days, it was hard not to be in awe of the man.

In the summers of 2012 and 2013, I worked on Byrne’s For One Night Only programme, which aired as a summer filler. The little-remembered show involved an interview with a guest musician during which they would perform several numbers – not necessarily a stonking new concept, but one that Byrne was well placed to present.

For a university student with a desire to make a career in media, the opportunity to work with a legend of broadcasting was an exciting prospect, however small my contribution was to be. It’s worth explaining that the runner on a programme is responsible for the tea and coffee in addition to looking after the needs of the presenter and the production team.

One abiding memory of that time was the kindness of the man. For example, at the end of the first series I worked on, Byrne brought the entire production out to lunch after the filming was over, including me.

This may not sound particularly astonishing but there were some presenters who I worked with for brief periods who wouldn’t go to the trouble of remembering your name. That most certainly wasn’t the case for Byrne, who brought us all to what was then O’Connell’s in Donnybrook for an afternoon lunch.

Even during the filming of the programme, Byrne would always be in a good mood when arriving at RTÉ Television Centre in Donnybrook. Then in his late 70s, it was a gruelling filming schedule spread over two weeks. The first season I worked on – series two of the show – was filmed over six long days in June 2012.

This involved afternoon rehearsals followed by a break before the audience arrived and the programme was filmed. After rehearsals, Byrne would go for a nap in his dressing room to prepare for the evening recording.

He was strict about ensuring the audience didn’t get much of a glimpse into the production process. After every show he’d be sure to hold on tightly to his cue cards before I arrived on set to take them away so he could get his photographs with the audience. More often than not, they were more interested in getting a picture with him than the guest of the evening.

On one occasion I was late getting to studio and, in his idiosyncratic way of speaking, I arrived to set with Byrne looking around saying “where’s Peter?”, his voice, the product of elocution lessons, stressing the “P”.

After the programme was done, and the guests were back in the Green Room, Byrne would have a whiskey before retiring home. Even after the series wrap party, which took place after an episode with Sinéad O’Connor was filmed, Byrne headed home just before 11pm.

He may have been winding down, and the show certainly didn’t have the same impact on public life that the Late Late show did, but Byrne hadn’t lost an ounce of his professionalism. Though I got a mere glimpse of how he operates, working on his programme was a lot of fun. And that, in no small part, was down to Byrne.