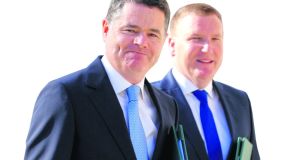 Paschal Donohoe’s double act with Michael McGrath may have got off to a reasonable start, but they shouldn’t congratulate themselves too much just yet.

Of the many faultlines that can cause tension between coalition partners, from policy differences to personality clashes, there are surely few more fraught tests than ministers from different parties having to share the limelight on national media. Politicians aren’t generally noted for their lack of ego, after all, even in times like these.

So it’s illuminating when Minister for Finance Paschal Donohoe and Minister for Public Expenditure Michael McGrath appear together on Today with Claire Byrne (RTÉ Radio 1, weekdays) for the show’s traditional post-budget phone-in. It’s disappointing too.

The fact that ministers from historically opposed parties treat each other with almost galling respect throughout the hour-long interview may be a good omen for the longevity of the Coalition, but it spells bad news for listeners seeking on-air friction. Nor does it help Byrne’s cause. Donohoe and McGrath form such an effective tag team that she struggles to lay a glove on them.

It’s the first time that Byrne has hosted the budget phone-in, a ritual that goes back to Pat Kenny’s tenure on the Today Show, and which by now is showing its age. During the post-crash era it was must-listen radio, a kind of Late Late Toy Show for fans of political embarrassment, as finance ministers lamely tried to justify swingeing cuts to baying callers. But as government purse strings have loosened, so it has become a more rote affair in recent years. The most notable feature has been the smothering platitudes with which Donohoe fobbed off awkward questions in his role as (sole) minister for finance.

As Byrne opens Wednesday’s programme, she does little to shake up the stale format, quizzing her guests in almost cursory fashion. In fairness, the resurgent Covid crisis makes it difficult for her to pitch wilfully awkward questions without appearing insensitive, though it doesn’t help that McGrath at one point corrects the host’s budgetary figures.

When Byrne opens proceedings to the floor, however, the ministerial duo are initially discomfited. Deborah, a creche worker, asks why they “put no value” on her work, following the lack of investment in the childcare sector. Deborah’s carefully articulated anger is such that nervous coughing can be heard in the background before Byrne invites McGrath to answer.

The Fianna Fáil Minister wheels out empty reassurances about valuing creches and acknowledging low pay before Deborah interjects. “Just to jump in there,” she says, politely but firmly. “I have two jobs, I earn €17,000 a year.”

Overall, the Ministers emerge unscathed, though it’s as much to do with evolving circumstances as the munificence of the budget

She adds that while the childcare sector doesn’t receive protective gear from the State, she has no sick pay should she fall ill. Byrne piles in, noting “there was nothing for [childcare] workers, parents and providers” in the budget. In the end, McGrath is reduced to limply remarking that “I’m a parent myself” by way of cover.

It’s an inauspicious start, but Donohoe steadies the ship, seeing off tricky questions with self-satisfied confidence. When another caller, Jimmy, complains that petrol and road tax increases will render his old Toyota unviable, Donohoe tries to defuse the situation. “I can hear the love for your car in your voice,” the Minister says, imagining Jimmy polishing his 1999 Corolla. It’s presumably meant to be witty, but as Donohoe repeatedly refers back to the make of Jimmy’s car, it just sounds patronising.

Overall, the Ministers emerge unscathed, though it’s as much to do with evolving circumstances as the munificence of the budget. As Byrne remarks, the new financial supports look like groundwork for a fresh lockdown, as indeed is the case by day’s end. And while her guests avoid any major slip-ups, their appearance is revealing in other ways, notably the “we-know-best” manner that Donohoe is prone to.

His double act with McGrath may have got off to a reasonable start, but they shouldn’t congratulate themselves too much just yet.

The sense of misplaced hubris is present elsewhere on Wednesday. When Tánaiste Leo Varadkar appears on the Pat Kenny Show (Newstalk, weekdays) he is typically polished, bolstered by an impressive command of detail and a splash of candour. Pressed on the ramifications of the State taking on so much borrowing, Varadkar replies, “There’s no perfect answer here.”

When Kenny asks why the pandemic unemployment payment (PUP) has been reduced, however, his guest suddenly waxes nostalgic. “I was one of the people who invented the PUP,” he recalls. “It was me, Regina Doherty and Paschal Donohoe on a sunny day in March or April.” Ah, what a time to be alive. Varadkar’s anecdote has much the same effect as someone boasting they’re the inventor of ration cards.

Again, the tone is striking: it’s surely premature to crow about crisis management skills during an ongoing emergency.

A more vivid snapshot of how the pandemic has changed lives is heard on Lunchtime Live (Newstalk, weekdays), when Andrea Gilligan talks to people from the beleaguered live entertainment sector. While arts funding receives a welcome increase in the budget, the host discovers that the future looks bleak for many practitioners, particularly those at the commercial end of the cultural sphere.

Gilligan talks to John Lonergan, a Riverdance “captain” who recalls the production’s last New York run being cut dramatically short by the Covid outbreak. With packed theatres a distant prospect, he thinks “it’s going to be quite difficult to get back”. This seems an understatement.

As Dave Browne of Dublin band Picturehouse notes, even at Level 1 of the pandemic plan musicians are unable to perform to full houses. “People selling prized instruments, selling their cars,” he says. “There’s nothing in place.”

It’s particularly hard for practitioners in the commercial performance world, who, as musician Matt McGranaghan observes, are self-sufficient even as they endure cracks about not having real jobs. “People are at their wits’ end,” he says.

It’s a downbeat but vital item from Gilligan, a stark reminder of how far things have fallen. State supports are no substitute for paying audiences at live events. We’re all the poorer for it: ministerial interviews just don’t have the same appeal.

An enjoyably snappy division of the sexes emerges on Wednesday’s Drivetime (RTÉ Radio 1), as Sarah McInerney and Cormac Ó hEadhra clash on eating habits. McInerney talks to journalist Lise Hand about a Sunday newspaper agony aunt column, which advised a single working mother not to be too hard on herself because she had gained weight during lockdown.

Both women praise this as empathetic, non-judgmental advice, but Ó hEadhra vocally disagrees, calling it “problematic” given the health problems of obesity. When Hand remarks he’s missing the point about women being too self-critical, Ó hEadhra shoots back, “I don’t think I am.”

Happily, tempers don’t fray, with McInerney deeming a story “a message of hope and kindness”. “And overindulgence,” adds Ó hEadhra. Hand has the last word, however: “Typical man.” Great fun, though.