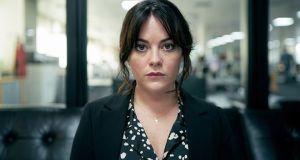 The excellent Sarah Greene in Roadkill

Hugh Laurie has a great villain’s face in that he projects not menace or pure evil but a chilling implacability. It’s often the quiet ones who need watching and in Roadkill (BBC One, 9pm) Laurie surveys the world through lidded, inscrutable eyes.

He also appears to be delivering a sly Boris Johnson impersonation in this muddled and only occasionally gripping new thriller from David Hare (The Hours, Collateral). To be sure, Laurie’s Conservative party minister Peter Laurence is only a little bit Boris – the chief resemblance being he’s an outsized personality who understands the public loves him because he’s a “character”.

That’s in public. In private he is a philanderer, and, very possibly, a corrupt businessman. He’s also an implacable adversary. And, as Roadkill begins, he has figuratively carpet bombed an Irish journalist named Charmian Pepper.

Peppy Pepper is portrayed by Sarah Greene. The Cork actress was last seen injecting much needed vitality into Normal People (can we agree, now the dust has settled and lockdown cabin fever retreated, that Lenny Abrahamson’s non-romcom was stylish but oh so dreary?). Here she portrays a reporter who appears to have flushed her career away after running a story accusing Laurence of dodgy dealings. He sues and, at the libel trial, she refuses to reveal how she came by a key piece of information.

Laurie and Greene are both great. Nonetheless, they seem to be starring in different dramas. He’s going big, portraying a knave as grotesque as he is charming.

Greene, by contrast, appears to have been told she’s the lead in a Mike Leigh-style socialist realist think-piece. The two halves never entirely fit. Hare, meanwhile, enthusiastically ticks a proud British drama cliche by making his Irish character an alcoholic. Well of course she is.

These aren’t the only jarring notes. A “bombshell” story about Laurence having potentially fathered a mixed-race child in the 1990s is presented as if it had the potential to destroy his life in politics. Would it?

Helen McCrory’s Prime Minister Dawn Ellison, for her part, comes across as a mash-up of Margaret Thatcher and the impulsive politician Keeley Hawes played in Bodyguard. It’s a cover version PM rather than a realistic portrayal.

Hare clearly has a great deal to get off his chest about the dire condition of the British body politic. Brexit is done and dusted we are told, and Laurence sees himself as representing the UK’s brave new future.

However, in putting the country in the hands of a mendacious liar Britain has surely doomed itself, Hare suggests. This is a message with which the writer’s natural constituency of chattering-class Londoners would no doubt agree (as indeed will most Irish viewers). As the raw ingredient for a big budget drama, though, it just sits there, a bit lumpy and clunking.

Roadkill has a lot to say politically. Yet, as a thriller, it suffers for being far too middle of the road in plot and pacing. Ultimately it’s dazzled by the headlights of its own perceived cleverness.