The great historical sin of slavery is framed as a scar on Africa, a stain on Europe’s soul 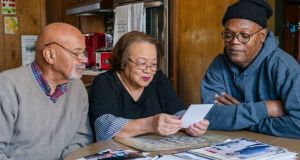 Jackson, to his credit, is clear throughout that, while his family’s history is of course bound up in slavery, this isn’t about him.Photograph: Sabrina Lantos/BBC/Associated Producers/Cornelia Street Productions

When Samuel L Jackson visits a village in a remote region of Gabon it is, he reports, just like coming home. The lean-to buildings, the washing on the line, the locals shooting the breeze. All of it carries uncanny echoes of his upbringing in rural Georgia, far across the Atlantic Ocean.

These insights bring a touch of the personal to what might have otherwise been an overwhelming and bleak survey of the institution of slavery. There is, after all, so much sadness and injustice to go around in Enslaved With Samuel L Jackson (BBC Two, Sunday), with over 12 million Africans trafficked across the sea by the European powers.

Jackson, to his credit, is clear throughout that, while his family’s history is of course bound up in slavery, this isn’t about him. The Pulp Fiction, Star Wars and Avengers star sets to one side his Hollywood aura as he travels to Africa to humbly bear witness to the suffering of his forebears.

The series, which also features journalists Afua Hirsch and Simcha Jacobovici, arrives at a timely moment, coming as it does after a summer of Black Lives Matter protests. In Britain these marches have prompted long overdue soul-searching about the villainous legacy of imperialism and the evils wrought in the name of queen and country.

But Britain’s centrality to the slave trade isn’t a key strand of this documentary, which originally aired in the US on the Epix cable network.

The great historical sin is rather framed as a stain on the pan-European soul. This is demonstrated by the story of a Dutch captain who, when his ship ran aground, locked 600 prisoners below deck and left them to drown.

Jackson meets Diving With A Purpose, scuba divers who explore and preserve African slave trade ships across the Atlantic (although you wish they didn’t have to deploy arcane and loaded phrases such as “British Isles” as they went about their commendable task). A tusk recovered from one such wreck is brought aboard and Jackson’s eyes fill with pain as he realises that the bodies of many Africans would have been left to rot alongside it.

The scars inflicted upon Africa are also confronted. In Gabon, to where Jackson has traced his ancestry, the actor visits a sandbank covered in millions of oyster shells. These are the detritus of the last meal enjoyed by prisoners before they were shipped to Brazil and the American South to toil in the fields. It’s a chilling “monument” a crime that spanned continents and generations and a reminder of how the toxic aftermath of slavery shapes the world to this day.